The KBO’s seeing an interesting correlation this season between the performance of the fifth pitcher in each team’s starting rotation and their standing in the league. 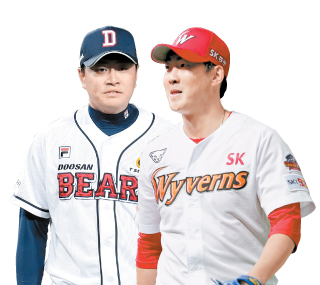 The league’s top three teams - the Doosan Bears, NC Dinos and SK Wyverns - have some of the best fifth starters in the league. Looking at their ERA, the Bears’ Lee Young-ha and the Wyverns’ Moon Seung-won are tied for seventh, at 1.80, while the Dinos’ Park Jin-woo is ranked ninth with a 2.05 ERA.

Although it’s only the beginning of the season, the three fifth starters - generally the spot reserved for the weakest pitcher in the rotation - have a better ERA than most ace pitchers in the league.

Along with their low ERA, all three have pitched in more than six innings and had quality starts, making it easier for the bullpen pitchers.

Of the three, Park is showing the most improvement this season. He joined the Dinos in 2015 as a developing player and had only picked up two wins after 22 games by the end of last season. Park has already tied that career record, picking up two wins in five games with a 2.05 ERA so far this season.

The Wyverns’ Moon has the lowest opposition batting average, at .155, among domestic pitchers and a 1.80 ERA.

However, Moon hasn’t picked up a win in the three games he has started in.

The Bears’ Lee is also off to a great start. During the Bears’ game against the LG Twins on Sunday, Lee tossed eight scoreless innings to lead his team to an 8-0 win against its Jamsil rival.

“I always get on the mound thinking that I want to pitch longer [innings] and not skip the rotation,” Lee said.

The Kiwoom Heroes’ An Woo-jin and Samsung Lions’ Choi Chae-heung - both second-year pros and both fifth starters - have also gotten off to a better-than-expected start. An - who was given a 50-game suspension last season after reports emerged he assaulted his younger teammate in high school - is off to a better start this season, picking up a win and a loss with a 3.50 ERA.

“I think this is just a start,” An said. “I want to pick up 10 wins by pitching consistently, without getting any injuries.”

The Lions’ Choi started in three games and picked up two wins with a 3.27 ERA.

The Tigers’ high school rookie Kim Ki-hoon has a 5.63 ERA with a loss this season.

The Twins’ Bae Jae-june is off to a slow start with a 6.27 ERA and the Wiz’s Kim Min has a 7.52 ERA. Both pitchers have shown potential, but are struggling with inconsistency this season.

The Lotte Giants and Hanwha Eagles have a very different problem with their fifth starters - they haven’t really decided who they are yet.

At the beginning of the season, the Eagles’ had Kim Jae-young, Park Ju-hong and Kim Sung-hun as their last three starters, but all three have since been dropped from the rotation. Jang Min-je switched his position from bullpen to starter and has been successful so far, picking up two wins in three games, with a 2.20 ERA.

Bullpen pitcher Lee Tae-yang is also expected to make the switch. As a relief pitcher this season, Lee has picked up two losses without a hold or a save in eight games and has a 6.55 ERA.

Ahead of the season, the Giant’s new manager announced that the club’s fifth starter will be shared by two pitchers, a system known as “one plus one.”

This means two pitchers will split six innings between them, jointly acting as the starter before bullpen pitchers take over.

In three games using this system, the Giants have picked up a win and two losses.

In the one game that the Giants did win, manager Yang Sang-moon didn’t have to use the one-plus-one system as pitcher Park Si-young tossed a scoreless five and two-thirds of an inning.