On top of the world, BTS remains humble: K-pop megastars credit their chart-topping success to the power of their fans

On top of the world, BTS remains humble: K-pop megastars credit their chart-topping success to the power of their fans 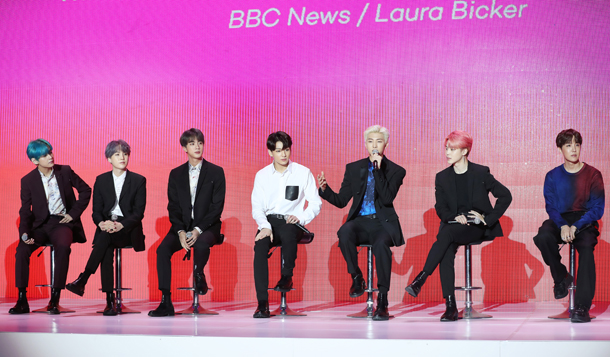 Members of BTS met with the local press on Tuesday at the Dongdaemun Design Plaza in central Seoul for a global press conference following the release of their latest EP “Map of the Soul: Persona” on April 12. From left are members V, Suga, Jin, Jungkook, RM, Jimin and J-Hope. [NEWS1]

Over the years, K-pop superstars BTS have consistently been compared to other musical acts, but thanks to their success, there’s no longer a need to describe them as anything but BTS. Having conquered not only Korea but the world with records never achieved by any other K-pop act, the group is seeing its success grow once again after the release of “Map of the Soul: Persona,” the septet’s seven-track EP that has taken the world by storm since its release on April 12.

The group met with press from all around the world at Dongdaemun Design Plaza in central Seoul on Wednesday for its very first global press conference, which was also streamed live on the group’s official YouTube channel. During the meeting with hundreds of local and foreign reporters, the members spoke of their gratitude for their fans (known as ARMY), detailed their journey to the top of charts worldwide and their plans for the future.

“We’ve prepared something new for this press conference,” said leader RM. “I’m so glad that we have the chance to speak to not only the local and global press, but also ARMY, like this. We hope to tell you everything about our album [and about] the hard work we put into making it.”

Throughout the 30-minute press conference, each member chose from 150 keywords that each contained a question related to the word, then continued onto a question-and-answer session for reporters on site.

The group’s leader RM was asked what inspired the members most while making this new album.

“Over the past two and a half years, we were constantly giving the message that loving yourself is true love. We were able to experience some things that we didn’t even dare dreaming of. So when we thought of what to say this time [for the new series of albums], we decided to talk about love, and the source of the love that brought us here to where we are today. I think it was all part of getting to know ourselves and how we are inside.

“If ‘Love Yourself’ was what we told ourselves, then ‘Map of the Soul’ will be about finding out how our souls are shaped,” he added.

Suga answered questions about “Boy With Luv,” the new album’s lead track, and Halsey, the American singer featured on the track.

“We talk about the smallest love and attention in our lives, the joy that we get from the smallest and humblest of things. And just like RM said, we believe that we are here because the fans allowed us to be here, which is why we went back to the beginning. That’s how [‘Boy With Luv’] came about,” he said.

Halsey shared her appreciation for having collaborated with the septet through a pre-recorded video, calling the opportunity something that happened “by fate.”

Jungkook described ARMY as an “inseparable” part of the group. “They are everything to us, the people who made [us] BTS who we are today,” he said.

Having had more success than any other K-pop act before them, the group does feel the weight of the burden, but according to Suga, they have been able to overcome that pressure thanks to their fans.

“We came together because we wanted to make music together,” said Suga. “But we went through such a long period of hard times. We pulled ourselves together, failed and then started all over again so many times. I think that’s why ARMY are so proud of us, which is why we always think about how we can repay them. So we try to be a positive influence for people, because they are the ones that influence us positively.”

Jimin added, “We give them good vibes, but the fans are the source of our positivity. They are the sole reason that we could climb this high. We want to make you happy, because you make us happy.”

At the end of the day, BTS attributed their success not to luck or hours of practice, but to the fans that made everything possible.

“I think what makes us special is the fact that we have met very special fans,” Suga said. “We thought so much about it on our own, and we wondered about why so many people love us. And as much as we are different from everyone else, we are just as similar. So what we think is that the fans, who are always there for our new music, [are the answer].”

RM even revealed a dark secret about the hardships the group once faced.

“There were even times when the lights would scare me so much. The audience scared me. I couldn’t see them sitting because of the heavy lights, but they were watching my every move and expression. I wanted to run away. But I realized I wanted to achieve things on stage more than run away. The fans gave me that energy, and it helps me keep balance.”

The septet’s newest music has created a sensation across many fields, not just music. Big Hit Entertainment announced prior to the press conference on Wednesday that “Map of the Soul: Persona” topped Japan’s Oricon digital albums chart for the fourth time in its first week of sales, the most ever achieved in the history of the Japanese chart. The news comes after Billboard and Britain’s Official Chart reported on Tuesday that BTS will rank No. 1 on their albums chart when the chart is renewed this week, as the group has already reached the necessary sales and streaming numbers. Local music charts are filled with the pink album cover of “Map of the Soul: Persona,” while their music can be easily heard on the streets.

Outside of music, author Murray Stein’s book “Jung’s Map of the Soul” found itself on the best-selling book list in Korea in late March thanks to the group’s ardent fans who bought the book to understand the overall theme of “Map of the Soul: Persona.” The group members were said to have read parts of the philosophical book while working on the new EP, using the idea of the soul and the self from psychologist Carl Gustav Jung.

“Honestly, we didn’t read all of it,” confessed RM. “But we did watch a lot of YouTube videos and read posts online [to understand the concept]. A lot of people are curious about what we are going to be doing next. We can’t say too much, but it will be about the energy that brought us here, the source of that power and the tomorrow that we will be living in.”

The new works, however, will not include songs sung in English, according to the leader. “We don’t have any plans for making English albums. But just like remix versions of our songs, or like our collaboration with Steve Aoki, we’re open to all kinds of new and fresh collaborations in the future.”

The group had words of advice for younger celebrities who look up to the group and dream of one day becoming the next BTS.

“I don’t think there will ever be a second BTS,” said Suga. “For instance, we had our very own heroes when we were younger. And when I started working in music, I thought that I wanted to become just like them. But at the end of the day, I became BTS, not them. So instead of there being another BTS, I think the greatest thing will be if different great artists keep coming.”

V added, “I want to tell them not to get hurt by the failures they face. Because those [hardships] are the experiences that help you step up. They will become memories that will help you grow bigger one day.”

So what does the group see as the next chapter in the book of BTS?

“There are so many things that I would like to do in the future, but we have to focus on what we have to do here and now. And so right now, I’d like to pull off the stadium tours,” Suga said. “And maybe take home an award at the Billboard Music Awards, because we’ve been nominated for two awards.”

The resolute RM said, “We are so grateful to be compared to The Beatles. I’m a huge fan, but it makes me feel more humble and modest every time I hear someone say that. I’m so grateful, but BTS will be doing their best as BTS, as a group from Korea.”