LG U+ focuses on impaired users

LG U+ focuses on impaired users 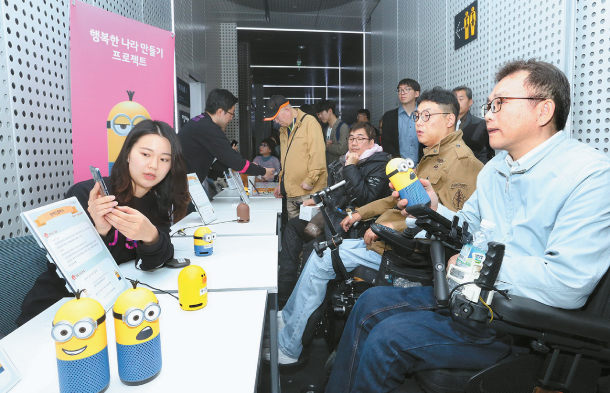 People with physical impairments try calling a taxi that specifically serves disabled people with the Clova smart speaker. [LG U+]

LG U+ vowed to provide quality services to customers with impairments, the mobile carrier announced Wednesday.

The telecoms operator on Monday launched a camera app based on artificial intelligence (AI), and started offering an Internet of Things (IoT) service to customers with impairments in March through Naver’s Clova smart speaker in collaboration with Naver and Seoul Facilities Corporation.

“LG U+ will apply AI and IoT technologies to offer services to those who need such technologies the most, and contribute to raising their quality of life,” said a spokesperson for LG U+ at a press event held in central Seoul on Wednesday. The mobile operator hopes to help customers with impairments handle simple tasks without help.

The event was co-attended by 20 people with impairments.

The camera app, Sullivan Plus, scans objects, people and text and explains what it scanned to visually-impaired users. For example, the app could inform the user about the gender and age of a subject after taking their picture. It could also read out text that is scanned.

The service is currently only available on Android phones and is free of charge.

Before using subway stations, people with impairments need to know if they are equipped with elevators, accessible restrooms and high-speed wheelchair battery chargers. Before, people with disabilities or their friends had to call the Seoul Facilities Corporation to confirm such information, which could take a couple of hours. Clova informs a user of the information instantly, according to LG U+.

But the service is new and has bugs.

When this reporter tried Sullivan Plus, the app was able to recognize a teddy bear but not an iPhone on a table, describing it as a toaster. The app identified a female LG U+ employee as a 19-year-old girl. An LG U+ spokesperson struggled to get Clova to work when trying to demonstrate its usefulness to customers with impairments at the press event.

“Although these services are still in the initial phase, I’m glad that they have been introduced,” said a mother of children with impairments who attended the Wednesday event. “Even if the services have limits, just being able to check subway facilities through the speaker will be very useful as I won’t have to personally call and wait to receive the information.”