Fresh produce e-commerce company Market Kurly has seen sales skyrocket over the past four years, shooting up to 156 billion won ($140 million) last year from just 2.9 billion won when it launched in 2015.

The number of Market Kurly users stood at two million as of March, according to the company. 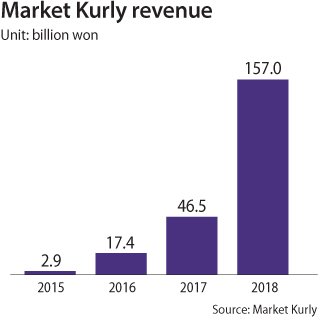 The exponential growth was backed by the success of its so-called dawn delivery service, which sees orders placed before 11 p.m. delivered before 7 a.m. the next morning.

Market Kurly has covered 3,134,637 kilometers (around 1.9 million miles) to deliver its products over the last four years, equivalent to 78 times around the earth, the firm said.

According to a survey conducted by a research firm Opensurvey, 21.8 percent said they shop online because of its quick delivery service. A total of 1,500 people took part in the survey, conducted in January.

Some of Market Kurly’s popular and steady sellers have been its privately produced products made in collaboration with partners. Such products include grass-fed milk from Jeju and organic eggs known as “Animal Welfare Fertilized Eggs.”

Such products accounted for 28 percent of the company’s entire sales.

Despite the improving sales of Market Kurly and other online businesses like Coupang, whose revenue last year broke 4 trillion won, many people are still reluctant about purchasing fresh meat or seafood online.

According to the survey, 27.6 percent of people who purchase groceries online answered they feel reluctant about purchasing seafood while 19.6 percent answered they have similar concerns about buying meat through e-commerce websites.

The survey showed that Market Kurly ranked third as a brand people conjure up when they think of an online platform that sells groceries, after Coupang and Emart mall.