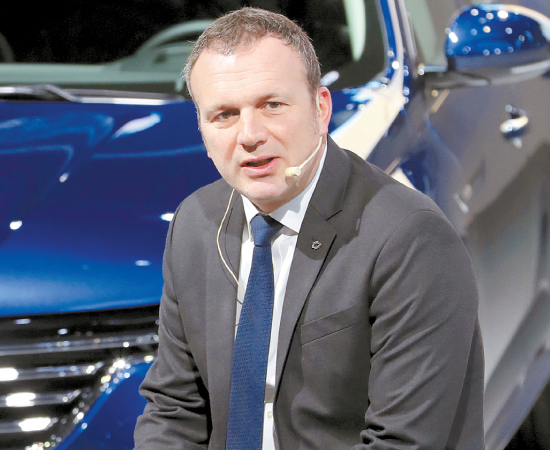 Renault Samsung Motors CEO Dominique Signora has promised continued investment as the Busan-based automaker serves as a key research and development center for its French parent.

In a Tuesday meeting with Busan Mayor Oh Keo-don, Signora asked for cooperation in resolving the labor dispute ongoing at the carmaker’s factory.

The union and management must sign an agreement on wages soon so the carmaker can begin producing the SM3 compact and the XM3 SUV for export to Europe, Signora said.

Exports account for 65 percent of production at the Busan plant, the automaker’s only factory.

The local automaker has played an important role in the development of the D-segment passenger car models, such as the SM6 sedan and the QM6 SUV. The Busan plant is a core asset for the automaker to remain competitive in the country, Signora said.

The Busan mayor said the city will cooperate with Renault Samsung Motors to put an end to the labor dispute.

The meeting between the two follows the automaker’s recent announcement that it will temporarily halt operations at the Busan plant from April 29 to May 3.

The automaker’s union has gone on 58 strikes for a total of 234 hours since last October.

The dispute has continued well past the March 8 deadline set for the conclusion of negotiations.

The union has called for the company to follow the minimum wage law, claiming that the required rate is not being paid. It also demanded management improve working conditions, and has said that mismanagement led to difficulties and mass layoffs.

The company argues that cost increases could harm its competitiveness.

Workers also asked for the right to participate in the human resources decision-making process. Signora said Tuesday that the automaker will not accept the union’s demand regarding personnel decisions.

Management, which wants to maintain the automaker’s output level by securing deals for export to the parent company, will outsource manufacturing and relocate workers, if needed.

With the operating rate for the Busan factory 20 percent below normal, Renault Samsung Motors has lost about 265.6 billion won ($234.2 million) as a result of the strikes through Monday, while 13,000 fewer vehicles have been produced.

To assure customers concerned about the quality of vehicles made during the drawn-out dispute, Signora said during the meeting that the automaker is providing a seven-year or 140,000-kilometer (86,992-mile) warranty program for those who purchase the SM6 and QM6 models.