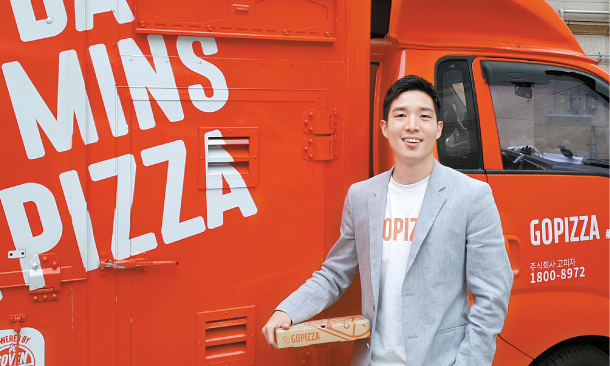 Lim Jae-won, founder of GoPizza, poses in front of the food truck where the business started. Lim was recently chosen as one of the top 30 leaders under 30 in Asia by Forbes. [KIM JUNG-MIN]

He’s attended top universities. He’s on the Forbes 30 under 30 in Asia list. And he makes pizza.

After graduating from Singapore Management University, 29-year-old Lim Jae-won received a master’s degree in engineering from the Korea Advanced Institute of Science and Technology (KAIST). He quickly veered from the subject of his studies and joined an advertising firm.

Then, he started making pizza. First in 2015 from a truck, under the GoPizza name.

The move was even more counterintuitive than it seems at first. At the time, pizza was a “red ocean” business, where everyone seemed to be losing money. Total sales in the business dropped from about 2 trillion won ($1.76 billion) in 2015 to 1.5 trillion won the following year.

It was certainly a difficult move. The first three years were challenging. But business started to pick up in 2017, and he has received 2 billion won of funding. The truck became a store, then it became 30 stores.

This year, he wants 80 stores, as well as 7 billion won in revenue.

Earlier this month, Lim made it onto the Forbes list. He is there alongside K-pop girl group Blackpink and soccer player Lee Kang-in.

Lim is aiming for markets abroad as well. He has his sights set on India, where the market is 6 billion won in size and growing 25 percent a year. A U.S. brand currently dominates.

A. It all started on February 2015. I was working late and wanted to eat pizza, but soon felt frustrated because, to eat pizza, I had to wait a long time and the pizza itself was big and expensive. That is why I tried single-serve pizza. I put “GO” in front of my brand name based on the idea that people could eat when they want to eat.

But pizza. It was already a “red ocean” market.

I did not think like that. I thought that the reason why the pizza market was in decline was not because consumers do not like pizza but because it was inconvenient to eat.

Did you know how to make pizza?

Not at all. I learned how to make pizza from a private training center for several months. During weekdays, I worked at an office, and every weekend, I baked pizza. For six months, every pizza I made was inedible. At the end of that year, I rented a corner in a restaurant in Insa-dong, central Seoul. Day by day, I was able to gradually make decent pizzas. At that time, I also worked part-time at a pizza franchise. While working there, I discovered the problem with pizza franchises.

What was the problem?

Even though there was a hole in the pizza I made and the result was a complete failure, it was sold as is. What’s more, the store was large, at 264 square meters (2,841 square feet), and the kitchen occupied half of the space. It was natural that rent and personnel expenses were high. About 2 to 3 million won of pizzas were sold at most a day, but the ingredients were stacked like military supplies for war.

First of all, the kitchen is small. We developed a foolproof system where a small number of people can make pizza fast in a small space. In addition, we produced dough at a factory, so we don’t make it at the store.

We invented the Goven, an oven with a rotating disk inside. We have applied for a patent. The oven is 30 percent smaller than other ovens and uses half the gas. In the Goven, six pizzas can be made in three minutes.

How do you control inventory?

We do nothing special. If we run out of pizza, we fill up the empty space in the morning. This is possible because of the pre-baked dough.

Were there any hardships?

I had a hard time dealing with investors and employees. I did not receive a monthly wage for the first three years, until July 2018, but I never stopped making decent pizza.