Biegun to make trip to Moscow

Biegun to make trip to Moscow 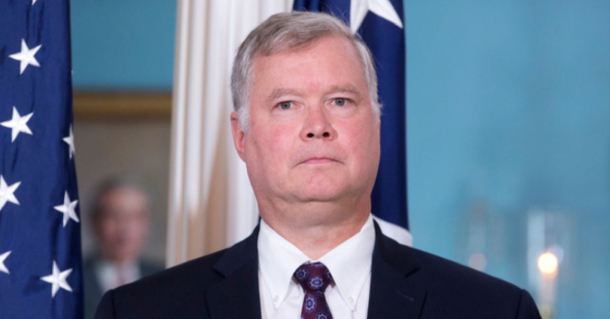 Stephen Biegun, the U.S. special representative for North Korea, will make a two-day trip to Moscow this week to discuss Pyongyang’s denuclearization, amid reports that a first summit between North Korean leader Kim Jong-un and Russian President Vladimir Putin is imminent.

The U.S. State Department announced Tuesday that Biegun will visit Moscow over Wednesday and Thursday “to meet with Russian officials to discuss efforts to advance the final, fully verified denuclearization of North Korea.”

This comes among reports that Kim Jong-un and Putin are preparing for their first summit, which could be held as early as next week, likely in Vladivostok.

Biegun has helmed working-level denuclearization talks on North Korea, including preparations for the second North-U.S. summit in Hanoi, Vietnam, in February. The summit ended with no deal and left future prospects of negotiations unclear, as the two sides wrangled over the scope of denuclearization and timing of sanctions relief.

Movement toward dialogue has been picking up, with U.S. President Donald Trump telling South Korean President Moon Jae-in last week that he is open to a third summit with Kim. The North Korean leader likewise said last Friday that will await a “bold decision” from the United States until the end of the year.

Russia and China, both veto-wielding members of the UN Security Council, have been traditional supporters of North Korea in the United Nations and favor a phased approach to denuclearization and the gradual easing of sanctions.

However, the U.S. State Department has said there will be no sanctions relief until North Korea’s complete denuclearization.

It is likely that Biegun may ask for Russia’s cooperation in sanctions enforcement on North Korea. His visit comes amid speculation that after the collapse of the Kim-Trump summit, North Korea could be pivoting toward its traditional allies Russia and China.

The Russian Foreign Ministry this week confirmed that preparations are underway for a Kim-Putin summit, without providing any further details.

While Kim has had four summits with Chinese President Xi Jinping, starting with his first overseas trip to Beijing in late March 2018, he has yet to visit Russia or meet with Putin. Kim’s talks with Xi usually came before making big decisions, such as the first and second North-U.S. summits.

South Korean Vice Foreign Minister Cho Hyun met with Vladimir Titov, the Russian first deputy foreign minister, in Moscow on Monday, and discussed the situation on the Korean Peninsula and cooperation in the United Nations. Cho also met with Morgulov.

Cho also confirmed to reporters Tuesday that he was told Kim-Putin summit preparations were underway.

Also in March, Kim Chang-son, the de facto chief of staff for the North Korean leader, made a weeklong trip to Russia, visiting Moscow and Vladivostok from March 19 to 25. His visit fueled speculation that Kim may be planning his long-awaited visit to Russia.

Kim Jong-un met with Russian Foreign Minister Sergei Lavrov in May 2018 in Pyongyang. Kim, during this visit, accepted an offer to meet Putin in Moscow. There have been increased diplomatic exchanges between North Korea and Russia in recent weeks following the Hanoi summit, including a Russian parliamentary delegation’s visit to Pyongyang.