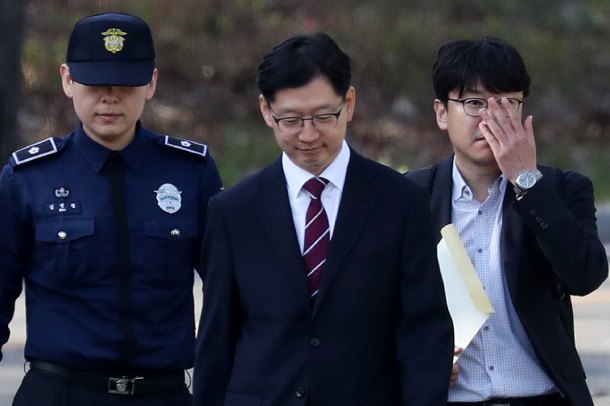 South Gyeongsang Gov. Kim Kyoung-soo, center, walks out of the Seoul Detention Center on Wednesday after being released on bail after more than two months in detention over his role in an online opinion-rigging scandal during the 2017 presidential election. The Seoul High Court ruled on Wednesday that Kim should be released on the condition that he stay in his residence in Changwon, South Gyeongsang. [NEWS1]

South Gyeongsang Gov. Kim Kyoung-soo was released on bail Wednesday after more than two months of detention over his role in a major online opinion-rigging scandal during the 2017 presidential election.

The Seoul High Court ruled that Kim should be released on the condition that he remain at his official residence in Changwon, South Gyeongsang, while undergoing his appeals trial. In late January, a lower court had convicted the governor of obstructing the business of Naver, Korea’s largest portal website, along with blogger Kim Dong-won, better known by his internet alias Druking, and sentenced him to two years in prison while also placing him under immediate detention. The two were found guilty of jointly orchestrating a massive opinion-rigging campaign using a computer program to post and upvote thousands of comments on Naver that supported Moon Jae-in’s election bid. Now, 77 days later, Kim is free to resume his duties as governor of South Gyeongsang - though within the confines of his residence - in return for bail of 200 million won (around $176,000). The court also added that Kim must not meet anyone in connection to his trial nor try to appease or threaten them in any way.

At a press conference following the hearing on Wednesday, Kim thanked the court for letting him return to his job as governor and said he would prove that the earlier lower court ruling had “twisted the truth.”

Kim was also convicted and given a separate 10-month jail sentence by the lower court on violating election laws by allegedly promising Kim Dong-won’s friend a consular generalship in Sendai, Japan, in exchange for his continued service in the run-up to the local elections last June, in which Kim Kyoung-soo won the South Gyeongsang gubernatorial race.

The governor immediately appealed the trial while filing for bail early last month, arguing that he was not liable to take flight or destroy evidence, and that the urgency of governing the province required his presence.

The prosecution retorted by claiming that bail approval would amount to unwarranted privilege for a sitting governor and that Kim was likely to tamper with evidence during his trial.

Presiding Judge Cha Moon-ho of the Seoul High Court appeared to favor granting bail in Kim’s first appeals hearing late last month, when he said that a trial without detention was the “preferable” course - as well as standard protocol in such cases.

Cha, however, also expressed a personal concern - which is rarely done by Korean judges in court - those on both sides of Kim’s controversial trial holding the court in contempt over its fairness.

The dispute around Kim Kyoung-soo’s trial involves both the governor’s status as a close ally and former aide to President Moon Jae-in as well as a major scandal hounding the judiciary that has spurred serious challenges to its neutrality from political and civic circles.

Saying that the public criticism of judges and contempt for a yet undecided verdict was an “unthinkable situation in a civilized country,” Cha warned critics not to display contempt for what he called “the sacred proceedings of the court.”

Kim’s release, which was immediately welcomed by the ruling Democratic Party, is believed to have been granted on the same lines as the bail granted last month to former President Lee Myung-bak, who spent nearly a year in prison over graft charges.