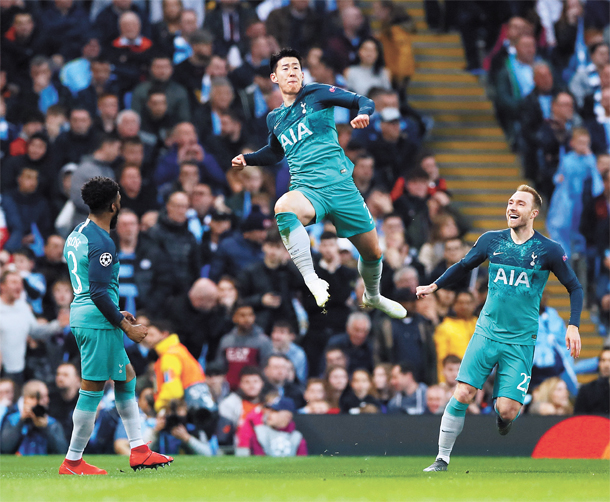 Son Heung-min of Tottenham Hotspur celebrates after scoring his second goal during the second leg of the UEFA Champions League quarterfinal match against Manchester City at City of Manchester Stadium on Wednesday. [REUTERS/YONHAP]

Son Heung-min of Tottenham Hotspur has done it again.

Despite Spurs missing star striker Harry Kane, Son successfully led the London club to the semifinals of the UEFA Champions League, scoring two goals against Manchester City on Wednesday to secure a win on aggregate at City of Manchester Stadium on Wednesday.

Spurs actually lost the match 4-3 but did enough to tie the score on aggregate to win the quarterfinal with more away goals than City.

It was City that took the lead, with Raheem Sterling scoring in the fourth minute. Son replied just a few minutes later, putting home an equalizer in the seventh minute.

Son found the back of the net again only three minutes later, giving Spurs the lead 10 minutes into the game.

City quickly tied the match again by scoring another only a minute later. The Manchester club extended its lead to 4-2 by scoring two more goals in the 21st and 59th minutes. Right when it seemed as if Spurs’ Champions League dreams were dashed, Fernando Llorente scored in the 73rd minute, taking the score to 4-3 and securing Spurs a spot in the semifinals.

But it nearly came crashing down in injury time. Sterling scored what looked like City’s fifth goal, but was disallowed after the Video Assistant Referee (VAR) ruled that Sergio Aguero was offside. At the end of an incredibly intense game, Spurs walked away as losers on Wednesday, but winners overall.

“It was an amazing game,” manager Mauricio Pochettino was quoted as saying on the Spurs website. “Manchester City are [a] great team. It was tough and to score three goals against them here is massive for us. I think we deserve to be in the semi-finals and now it’s about being sure we can arrive in our best condition.”

Although Llorente scored the crucial goal to secure that Spurs went through, it was Son that kept the club in the game.

“It was a crazy game,” Son said to Spurs TV. “I never had like this game. The game was really good to watch and to enjoy. I think the players worked really, really hard to get to the semifinals and what I said before, they deserve it.”

With two more goals, Son has now netted 20 this season.

With Kane out with an injury, Son has once again proven to be a crucial member for the club. A few months ago, when Kane was out with the exact same injury, Son stepped up to the plate. In 12 matches, he scored 11 goals, keeping Spurs comfortably in contention without Kane or midfielder Dele Alli.

With a win, Spurs will now play against AFC Ajax in the semifinals, starting Tuesday, April 30.

“You know, we arrive at the semifinal but we don’t want to talk about already [being] in the final,” Son said to Spurs TV. “Ajax is a very good team.”

The first leg of the semifinals is expected to be another tough match for Spurs as they’ll be missing another crucial player - Son. Due to accumulated yellow cards, Son is not allowed to play in the first match against Ajax.

In the group matches, Son received two yellow cards. Then during the game against City on Wednesday, Son received another, his third in the tournament.

“Of course I was very sad and still sad, but I’m a very positive guy,” Son said to Spurs TV. “I think the players can do it better, probably, without me. I think players [are] ready and should be enjoying, like [that’s] always what we’re doing and we will have a great result.”

City may have lost the Champions League match to Spurs, but they will have a shot at redemption tomorrow as the two face off in the English Premier League. In the Premier League this season, City is ranked second with 28 wins, two draws and four losses, totaling 83 points, while Spurs are ranked third at 22 wins, a draw and 10 losses, totaling 67 points. Liverpool leads with 26 wins, seven draws and one loss.

“This is a massive achievement for us,” Pochettino was quoted as saying on the Spurs website. “Now we’ll try to enjoy it - but not too much because on Saturday we have another game here.”