K. J. Choi looks ahead to life after PGA Tour

K. J. Choi looks ahead to life after PGA Tour 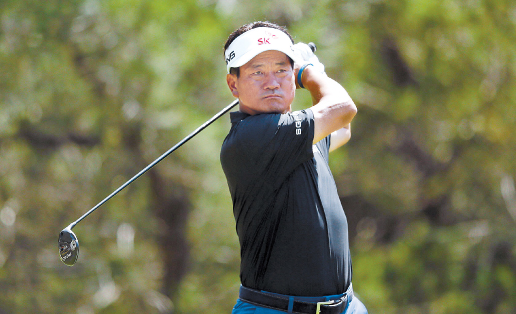 With his PGA Tour career winding down, Korean veteran Choi Kyoung-ju has started looking ahead to a future beyond competitive golf.

A junior golf academy will be a major part of it.

Choi is on Hilton Head Island in South Carolina this week for the RBC Heritage. At Harbour Tour Golf Links’ club house Tuesday, Choi, better known as K. J. Choi, spoke in detail about how he wants to help develop stars of the future.

Choi said he’s been on the receiving end of so much help from many different people over his professional career, which includes eight PGA Tour titles, and he hopes to give it back to the golfing community “in the most efficient way possible.”

He said he started thinking about opening his own golf academy three or four years ago.

Choi’s idea of a perfect golf academy is a place that doesn’t just offer lessons in golf, but that also stresses academics and helps build character.

“I’ve been training in the offseason with junior golfers for many years through my own foundation, and I’ve been telling them about the importance of academics,” Choi said. “I think it’s unfortunate that there are young players who do nothing but play golf during the season. That’s a Korean style of developing young players, and it has its limits. PGA Tour stars play with so much creativity because they put as much emphasis on studying as on golf.”

Choi’s two sons are both junior golfers. He said they only get to practice golf after school. When days are shorter in winter, sometimes the junior Chois only get to practice for an hour a day. But the father said they’ve been able to put in efficient days at the range or course, without needing long hours to work on their game.

“I’ve received so much help along the way to get to where I am today,” Choi said. “I hope to return such love and support by raising young golfers. I’ll tap into every bit of knowledge and experience I’ve accumulated over the years.”

Choi said Tampa, Florida, will be the site of his academy, but the real work won’t begin until August next year. For now, he will still be a touring pro.

Once he turns 50 next year, Choi will split his time between the regular tour and the Champions Tour, a circuit for the over-50 veterans.

“I’ll focus on the PGA Tour for this season, and once I start playing more on the senior tour, I’ll have more time on my hands to do things that I’ve wanted to do,” said Choi, who plans to enter about 10 regular tour events next season. “I’d like to retain my PGA Tour card for as long as I can.”

“Reaching the FedEx Cup playoffs and winning a tour event … I think they’re all possible for me, too,” Choi said.

In addition to playing, Choi has his hands full as an assistant captain for the International Team at this year’s Presidents Cup.

The biennial match play competition pits the United States against a team of non-European international players. This year’s event will take place at Royal Melbourne Golf Club in Melbourne, Australia, from Dec. 9-15.

“So far, South African and Australian players have been a big part of the International Team, but this year, Asian players will assume bigger roles,” Choi said. “Els told me to take care of Asian players.”

After the Presidents Cup, Choi will be the Korean head coach at the 2020 Tokyo Olympics. He also served as the national team coach at the 2016 Olympics in Rio de Janeiro.

“Though I am the coach, I won’t necessarily get to teach our players,” Choi said. “My main responsibility is to study the course, figure out how to play there and share that information with the players.”