‘Prism Fantasy’ rethinks the role of light in art: Paradise City installations use shadows and mirrors to question aspects of reality

‘Prism Fantasy’ rethinks the role of light in art: Paradise City installations use shadows and mirrors to question aspects of reality

Gabriel Dawe’s “Plexus No. 40,” made with Gutermann thread, was custom-made for Paradise Art Space and is currently displayed in the “Prism Fantasy: New ways to view light” exhibition, which runs through Aug. 18. [PARK MYUNG-RAE]

For Paradise City, the hotel and casino complex just outside of Incheon International Airport, art makes up a big part of its identity.

Paintings and sculptures from world-renowned artists like Alessandro Mendini decorate the complex’s marble halls and cushioned lounges while at Paradise Art Space, the hotel’s own art gallery, works by Jeff Koons and Damien Hirst are proudly displayed.

Israeli artist Daniel Rozin showcases unique mirror installations under the theme of reflection. His mirrors, which show a vague reflection of the viewer, are not made of glass but of screens and stuffed animals.

Rozin’s “Selfish Gene Mirror” (2015) features a screen display that reflects the color and likeness of the viewer through images akin to watercolor paintings. For his “Penguins Mirror” (2015), the artist attached 450 stuffed penguins on top of motors programmed to rotate in concert with the viewers’ movements.

“Penguins Mirror” started from exploring the question of “pixels and what their personality would be,” Rozin explained during a press briefing Thursday ahead of the exhibition’s launch. 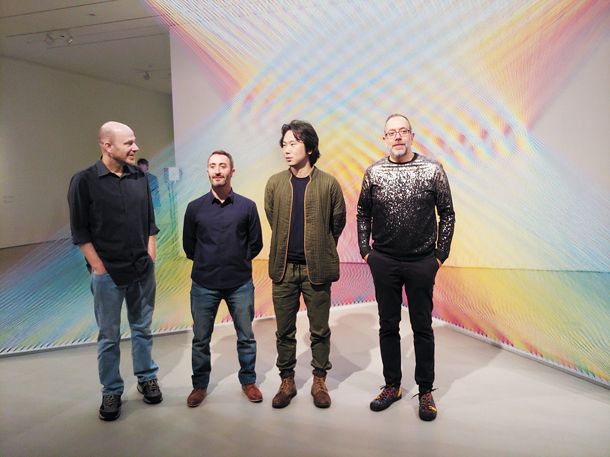 “The way [penguins] are black on the back and white on the tummy, they seem like natural pixels to me,” Rozin said. “I wanted to see if I could create a collective image with the huddle of the penguins.”

Under the theme of illusion, Korean artist Lee Yong-baek also presents LCD monitor-mirror installations through his “Broken Mirror” (2011) series, which was showcased at the Venice Art Biennale in 2011. His mirrors, while reflecting the viewer as they are, toy with the idea of reality as an illusion as they appear to suddenly break from bullet shots at regular intervals, leaving viewers wondering whether what they see is really real.

Set in a pitch-black isolated room, Kuwakubo’s installation features toy trains on a model railway that have headlights which shine on daily objects like figurines and waste baskets. The shadows that are cast onto the walls have the effect of transporting viewers to a different world, as the toy figures and objects seem to come to life and move.

Gabriel Dawe and Shin Bong-chull play with the idea of light as a spectrum. Shin, who spent his youth at his parents’ flower farm, attempts to capture vivid floral hues on “Streifen VR1314” (2014) and “Summer Flowers” (2019). Texas-based Mexican artist Dawe’s “Plexus No. 40,” on the second floor of the gallery, was custom-made for Paradise Art Space. The installation features long, colorful threads intersected with one another, producing an ephemeral and airy display. 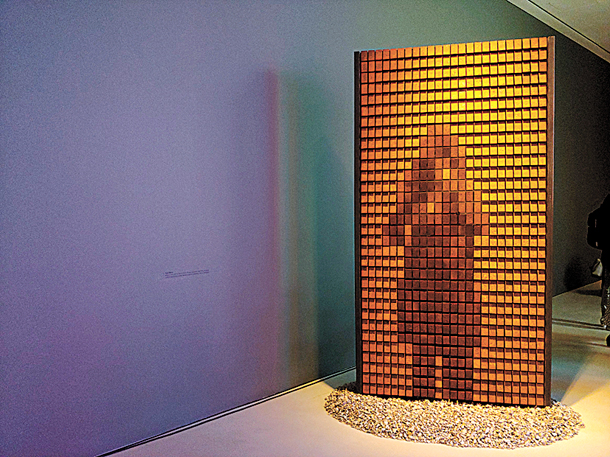 Rozin’s “Rust Mirror” (2010) is made with rusted panels that respond to viewers’ actions and mirror their reflection. [KIM EUN-JIN]

“It’s like an alchemic experiment where I try to materialize light,” said Dawe. “They’re not quite solid matter and they’re not gas or light either.”

“I grew up in Mexico City, and since I was a boy, I was not allowed to embroider, and that was really frustrating to me,” he explained. “As an adult man, I decided to use embroidery to challenge those gender norms that were forced upon me when we grew up.”

French artist Thomas Canto’s “Levitating Structured Inertia” (2019) and Chilean artist Ivan Navarro’s “This Land is Your Land” (2014), both explore light’s infinity and are exhibited outside the gallery space at different locations in Paradise City. Canto’s jagged sculpture, suspended from a ceiling, reflects the colors of the constantly-changing Paradise Walk, while Navarro’s work, two neon-lit towers previously installed at New York’s Madison Square Park, are located outdoors at the Art Garden.

“Prism Fantasy” will run through Aug. 18. The exhibition is free for members and hotel guests. Guided English tours are provided on weekends and holidays at 4 p.m. For details, visit www.p-city.com