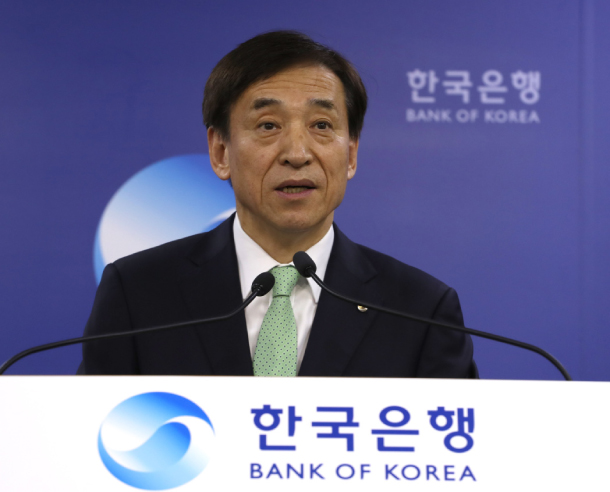 The central bank slashed its forecast for this year’s economic growth by 0.1 percent to 2.5 percent Thursday due to weak exports, lower corporate earnings and tepid investment.

But the Bank of Korea (BOK) held its benchmark interest rate steady at 1.75 percent.

The downgrade of this year’s gross domestic product growth estimate was necessary after exports were weaker than expected, especially semiconductor, and investments were disappointing, according to BOK Gov. Lee Ju-yeol.

“The exports and investment trends remained weaker than predicted in the first quarter,” said Lee.

Korea’s exports fell 8.2 percent to $47.1 billion in March, according to the Ministry of Trade, Industry and Energy. In February, the drop was steeper at 11 percent.

Semiconductor exports fell 16.6 percent to $9 billion in March. The fall was less severe than in February, which posted a 24.8 percent decrease to $6.77 billion. Korea’s semiconductor exports hit an all-time monthly record last September of $12.4 billion.

The decline owed a lot to a crash in semiconductor prices, although the government emphasized that physical volume of exports was actually increasing.

“The consensus is that the volume of semiconductor exports improved at a faster-than-expected pace in March and multiple think tanks forecast that further recovery will take place in the second half of this year,” he said. “Still, we keep tabs on semiconductors since some expect that the recovery could be delayed later than the second half.”

The BOK also trimmed its forecast for inflation to 1.1 percent from 1.4 percent, dragged down by lower prices for oil and agricultural produce.

Previously, the central bank had left open the possibility of a rate hike by saying it could adjust its accommodative policy stance if economic conditions improved.

In its latest statement, that sentence was dropped, indicating it is no longer interested in raising interest rates.

Asked if that indicates the BOK is more inclined toward a possible cut, Lee maintained his previous stance of not calling for a rate cut.

The moves led many analysts to predict that the BOK may hold rates steady possibly though this year.

Other economic institutes have also lowered their growth outlooks amid mixed economic indicators.

Moody’s lowered its growth outlook to 2.1 percent earlier this year, down from 2.3 percent predicted in November.

The International Monetary Fund maintained its previous projection of 2.6 percent earlier this year, but called for a supplementary budget worth around 9 trillion won ($7.9 billion) to achieve the target.

But the Finance Ministry has said the supplementary budget won’t be over 7 trillion won.