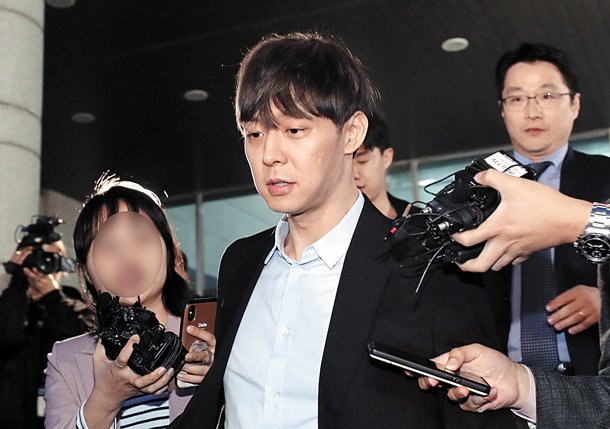 Park was called in for questioning on Wednesday morning on the suspicion that he took drugs with dairy heiress Hwang Ha-na early this year, and left the police premises nine hours later.

According to the police, Park attended the police questioning having “shaved off all the hair on his body” except for on his head and eyebrows,

Park’s attorney, however, explained on Thursday, “Park has frequently shaved his body hair off in the past [when he was active as a singer].”

“In fact, the police have collected hair from an unshaved leg and requested thorough testing at the National Forensic Service,” said Kwon.

The lawyer also expressed “deep concerns” about how news reports have revealed the existence of surveillance camera footage in his case while investigations are still taking place.

Police revealed that they have footage of Park transferring money to a bank account that the police suspects belonged to a drug dealer.

The police also found footage of him picking up something that seems to be drugs, 30 minutes after transferring the money.

“Park Yu-chun could have a different position on the situation,” said Kwon.

“He can explain everything that has been shown by the police.”

Park has denied all allegations, but will report to the police for another round of questioning in the coming days.