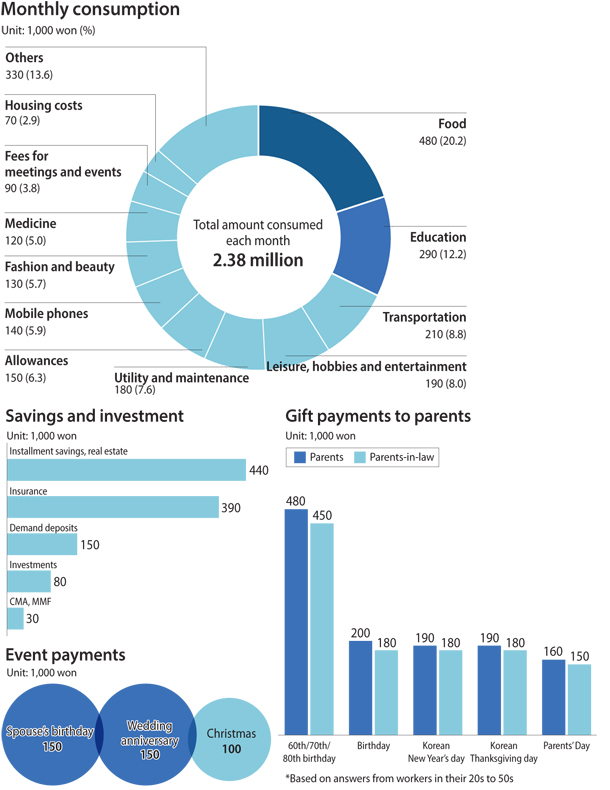 “How much should I pay as a guest?”

This is a common question raised by those attending a coworker’s wedding at a luxury hotel or a nephew’s first birthday party. A recent bank report gives a sense of how much the average person pays.

On Tuesday, Shinhan Bank released a report on the financial lives of ordinary people in 2019. It was developed from a survey of 10,000 individuals 20 to 62 years old and by using data from credit card records.

It is the third such report, the first released in 2017.

The biggest consumption increase was rent.

People who pay rent spent on average of 360,000 won a month, up 70,000 won from three years ago. Educational and medical costs increased by over 20,000 won. Organization and club fees and mobile phone subscription costs fell. Savings and investments averaged 1.16 million won a month, a quarter of average income. Of the savings and investment, 440,000 won went toward installment savings and real estate and 390,000 won went to insurance.

On average, those surveyed had 400.39 million won in assets, up 22.5 percent than three years ago. While that seems like good news, the reality is more complicated. Only the assets of real estate owners increased in value.

The rich got richer, and the poor poorer.

Along with general survey of 10,000, 1,000 office workers from 20 to 59 years in age nationwide were separately surveyed this year, and the results were included in the report as well.

One topic covered was the payments made when attending events. Of those surveyed, 60 percent chose 50,000 won as the amount they will pay.

At birthday celebrations for their parents, the office workers surveyed spend 200,000 won on average. For the birthday of a spouse or for an anniversary, they spend an average of 150,000 won. For weddings of siblings, they will fork over 620,000.

Shinhan Bank also included a financial map of office workers in Seoul. It is based on the bank statements of customers.

Office workers working in Jung district, central Seoul, were paid 4.07 million won a month on average. Those in Hoehyeon-dong 2-ga received the most: 6.52 million won a month. This area is the home of the State Tower Namsan, where tenants include BMW Korea and the Korea Investment Corporation.

Shinhan Bank released the report on its mobile platform, called Speedy, Optimized, Leading (SOL). If a user inputs gender and age, information relevant to them is offered.

“We have analyzed the financial trend for the last three years based on the big data we have accumulated,” said a source from Shinhan Bank. “Through a variety of channels, we will strive to offer better services to more people.”