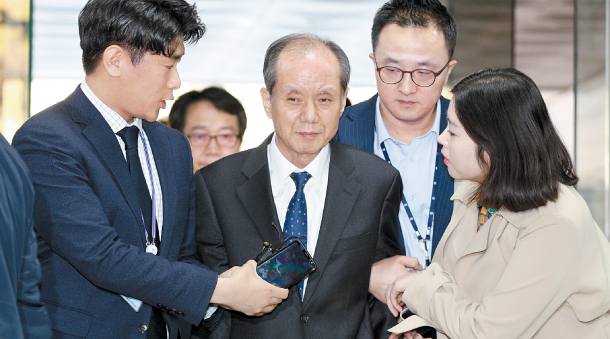 Former SK Chemicals CEO Hong Ji-ho is surrounded by reporters on his way to appear before the Seoul Central District Court in southern Seoul for a hearing on the legality of his arrest warrant on the charge of involuntary manslaughter Wednesday. [NEWS1]

Former SK Chemicals CEO Hong Ji-ho was arrested Wednesday night on the charge of involuntary manslaughter in relation to the humidifier sterilizer tragedy that caused 100 fatalities in 2011.

The arrest is an extension of a large-scale investigation that started in 2011 and put former top officials of Oxy Reckitt Benckiser, including the former CEO, behind bars last January.

This is not the first arrest of an SK Chemicals official over the humidifier sterilizer tragedy, but it is the first time the charge has been involuntary manslaughter.

After a day-long hearing on Wednesday, the Seoul Central District Court approved arrest warrants for Hong and another executive surnamed Han who is still working at the company. Seoul prosecutors had requested warrants for two other SK officials but the court turned them down, saying their authority and level of participation was not substantial around the time the products in question were released.

The court approved the arrest warrants on the basis that there was a possibility of Hong destroying evidence.

He is accused of not conducting necessary toxicity tests and failing to provide suitable warnings about possible dangers prior to the sterilizer’s release.

Hong was the chief executive at SK Chemicals between 2000 and 2006 and was in charge of making key decisions for the company when Aekyung Industrial’s Humidifier Mate was released. Based on raw materials chloromethylisothiazolinone (CMIT) and methylisothiazolinone (MIT) supplied by SK, the product was the second-deadliest humidifier sterilizer, responsible for causing 27 fatalities between 2002 and 2012. Oxy’s humidifier sterilizer caused 73 fatalities between 2006 and 2011.

Prosecutors suspect that SK was aware of the possible dangers before sales began, but did not conduct additional studies to clarify the extent of the risk.

In 1994, the Korea Oil Corporation requested a veterinary medicine professor at Seoul National University test the safety of CMIT and MIT-based humidifier sterilizers. Results came back saying the substances needed additional tests to ensure safety, but these tests never happened.

SK Chemicals acquired the corporation’s sterilizer business in 2000 and supplied the materials to Humidifier Mate between 2002 and 2012.

The Ministry of Environment reported SK Chemicals to the Seoul Central District Court last week, saying the company and affiliate SK Innovation did not submit the 1994 study reports during the ministry’s 2018 investigation. It claims that SK said it had no relevant information left, but had submitted papers to prosecutors this year.

Under a special law that went into effect in 2017, those who falsely testify or submit false information related to humidifier sterilizers can be sentenced to one year in prison or fined up to 10 million won ($8,800).

In March, SK Chemicals Senior Vice President Park Cheol was arrested on the charge of destroying evidence on the toxicity of CMIT and MIT in 2011 when a number of pregnant women died of unidentified lung diseases. Park is accused of having organized an internal task force to destroy evidence that year. SK denies the allegations.

The humidifier sterilizer case was reopened last January when the Environment Ministry announced results of an investigation that established the dangers of CMIT and MIT substances, which was not proved before.

In the initial probe launched in 2011, authorities concluded that substances polyhexamethylene guanidine (PHMG) and phosphoglycolohydroxamic acid (PGH) could be fatal if inhaled. As they were the main ingredients in Oxy’s sterilizer, the findings led to the imprisonment of multiple Oxy executives.

Victims also reported SK and Aekyung over Humidifier Mate in 2016, but prosecutors dropped the case due to a lack of evidence that CMIT and MIT were linked to lung damage.

Last week, Seoul prosecutors called in former Aekyung Industrial CEO Ahn Yong-chan for questioning over the sterilizer. Prosecutors suspect the company was also aware of the substances’ danger but did not verify the extent of the risks. Aekyung argues it did not participate in the manufacturing process.