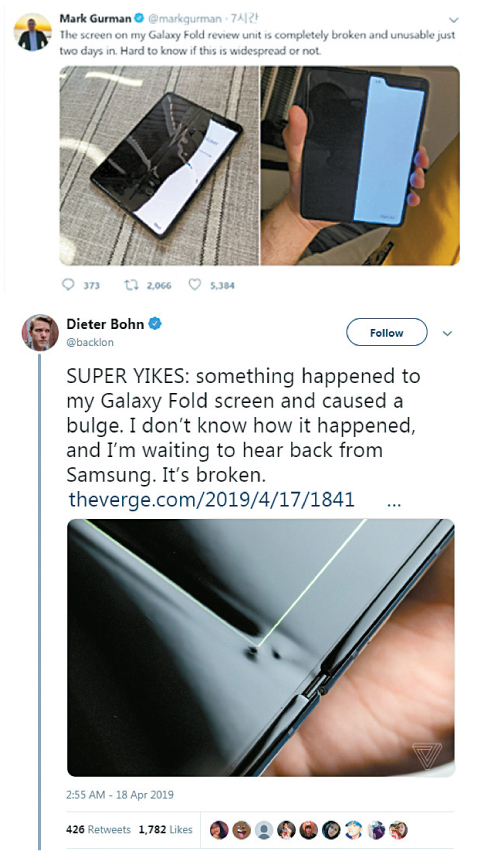 Reporters from CNBC, Bloomberg and The Verge have each tweeted pictures and videos showing faults with the folding screen of the Galaxy Fold devices they were given this week to review ahead of the phone’s U.S. release on April 26.

Steve Kovach, tech editor for CNBC, tweeted in the early hours of Thursday morning, Korea time, a video of his Galaxy Fold that showed the left hand of the screen flickering and flashing white with a bold black line splitting the screen in two, presumably along the point where the screen folds when it is closed. The video was captioned “After one day of use…”

The Galaxy Fold is designed to open like a book to become a 7.3-inch display tablet. The cover of the phone - the front when it is folded - is a 4.6-inch screen that works like a conventional smartphone. In all three reported cases, it is this internal folding screen that was defective.

Just a few minutes after Kovach’s tweet, Dieter Bohn, executive editor for The Verge, tweeted an image of his Galaxy Fold screen visibly buckling at the fold. According to the tweet, “something happened to my Galaxy Fold screen and caused a bulge. I don’t know how it happened, and I’m waiting to hear back from Samsung. It’s broken.”

Bohn later confirmed that Samsung is replacing the device.

“The screen on my Galaxy Fold review unit is completely broken and unusable just two days in,” tweeted Bloomberg’s Mark Gurman. “Hard to know if this is widespread or not.”

Two pictures of the device showed the screen mostly blacked out.

In a series of tweets, Gurman explained that he had removed what he assumed was a protective film from the screen when he began using it, but Samsung has since told him the film should not be removed. He also reported that his device is beginning to tear at the top of the fold and that any time his fingernails hit the screen they left “a seemingly permanent indent.”

Responding to the reports, Samsung Electronics said in a statement that it will “thoroughly inspect these units in person to determine the cause of the matter.”

The statement added that removing the “top layer of the display” - as was the case in at least one of the three reports - damages the screen. Samsung said it will ensure that future customers are aware that the film should not be removed.

This film, which Samsung said is made from a polymer, is being used on the Galaxy Fold for the first time. Unlike regular smartphones that use a tempered glass layer to protect the screen, the device needed a new material that bends.

“It was part of the display - if you think of smartphones, it would be the same as forcibly taking off the glass layer from the screen,” said a Samsung spokesman. “It was more of a result of misuse rather than an innate default of the product.”

CNBC has since confirmed that they did not remove the film from their Galaxy Fold and the screen still broke. A number of other reviewers also posted pictures showing the film peeling away from the screen, looking very much like the protective layer that consumers are used to peeling off the screen of a new phone.

Not all reports were negative. In response to the problems, Geoffrey Fowler of the Washington Post released a video showing him opening and closing his Fold 100 times without any issues. YouTuber Casey Neistat also released a popular video reviewing the device.

The Galaxy Fold is expected to go on sale in the United States for $1,980 on April 26. Preorders began this week but were halted due to excessive demand.