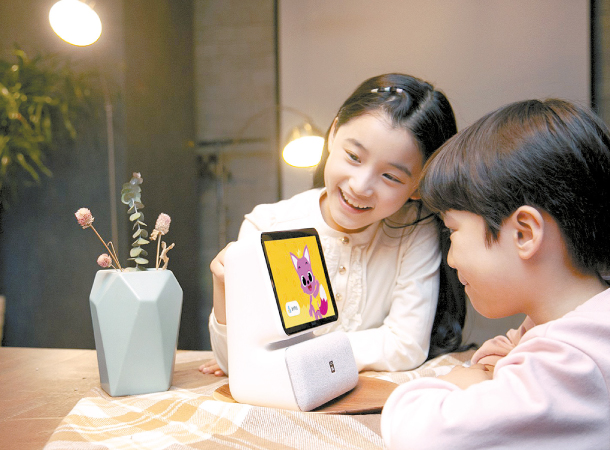 SK Telecom will introduce a new smart speaker with a screen, the company announced Thursday.

Unlike its previous artificial intelligence-powered smart speakers, the Nugu nemo will have a 7-inch screen the company hopes will be popular with housewives and children. The speaker comes with kid-friendly content that helps with language and math lessons, and simple brain teasers.

With the screen, users can play games like rock-paper-scissors. The speaker is able to recognize users’ movements through an image recognition feature.

“Unlike the previous models that centered on voice, Nugu nemo has combined the voice user experience with the display user experience,” said Park Myung-soon, head of SK Telecom’s AI business unit at a press conference held in central Seoul on Tuesday.

Apart from the lessons and games, Nugu nemo can access kid-friendly content from Oksusu, SK’s streaming service. Oksusu has thousands of examples of content for kids, according to Park. The company says it plans to strengthen its content by offering 5G videos in the near future.

With its image recognition feature and a camera, the speaker warns users when they get too close to the screen. That feature was added after some parents expressed concerns about their children’s eyesight.

Videos that record children when they get too close will be automatically deleted for security reasons. The speaker is able to distinguish videos that should be saved on the cloud and those that shouldn’t, Park said without specifying the standards.

The mobile operator says the speaker has been updated to offer high-quality audio.

Nugu nemo is equipped with a JBL stereo speaker. JBL is a premium audio equipment maker and owned by Harman.

Apart from a music service, which shows song lyrics on the screen, the product doesn’t have a lot of lifestyle content that could appeal to people without children.

“[The company believes] users can still enjoy [numerous services Nugu nemo offers at this point, like] listening to music with the speaker’s high audio quality, but we plan to add more functions in the second part of this year,” said Park.

Users are neither able to manage their home appliances via the voice-controlled speaker nor can the speaker make video calls.