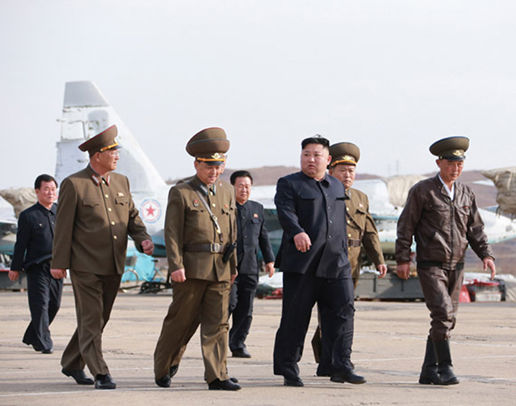 This image released on April 17, 2019 by the North Korean Official News Service (KCNA), shows North Korean leader Kim Jong-un with pilots of Unit 1017 of the Korean People's Army Air and Anti-Air Force, one of his most recent military outings. [KCNA/YONHAP]

North Korean leader Kim Jong-un on Wednesday supervised a test firing of a “new-type tactical guided weapon” developed by an institute responsible for its missile program, according to state media.

The development of the new weapon system was an “event of very weighty significance in increasing the combat power of the People’s Army,” read the state-run Rodong Sinmun’s English report on the test, which attributed the system’s development to the Academy of Defense Science.

Several military analysts in South Korea said it could a variation of a short range ballistic missile launcher imported from Russia called the 9K720 Iskander, which North Korea displayed at a military parade in Pyongyang last February.

The only description of the weapon itself in the Rodong Sinmun report was that its “design indexes” had “advantages … appreciated for the peculiar mode of guiding flight,” indicating that it was outfitted with a type of guidance system. The test involved “various modes of firing at different targets” that verified “the load of a powerful warhead,” the report added.

The Iskandar system is known to be able to carry two guided missiles fitted with warheads with a range of 500 kilometers and a guidance system with homing capacities that may fit the description provided in the state media report.

But U.S. Department of Defense officials cited by CNN said no missile launch had been detected by either the U.S. Northern Command or Strategic Command, both of which monitor strategic threats across the globe.

Kim’s decision to supervise a weapons test that falls short of a full blown missile launch could be an attempt to demonstrate to the U.S. his frustration with deadlocked negotiations over denuclearization without jeopardizing the process.

U.S. President Donald Trump mentioned before his last summit with Kim in Vietnam in late February that he was “happy” with the current talks with Pyongyang “as long as there’s no testing.” When that meeting collapsed, the North began to reassemble a missile launch pad on its western coast, prompting Trump to say he would be “pretty disappointed” if a launch took place.

The weapon tested on Wednesday may not have been detectable from the U.S., but the announcement has underscored that Kim could resume nuclear development at any time if it so chooses.

The Rodong Sinmun report added that Kim, after watching the test, praised the country’s scientists and munitions workers for “increasing the country's defence capabilities” and said that “there is no weapon impossible to make when they are determined to do.”

Kim pulled a similar move last November, when he supervised an “ultramodern tactical weapon test” by the same defense institute, which he called a “decisive turn in bolstering the fighting capability of the Korean People’s Army,” according to a state-run Korean Central News Agency report.

South Korea’s Unification Ministry at the time cautiously said the “ultramodern” weapon was likely to be a conventional one - perhaps a long-range artillery piece like a multiple rocket launcher - that did not appear to be in violation of Pyongyang’s self-imposed moratorium on nuclear and missile testing.

The Academy of Defense Science is known to be behind the successful development of the Hwasong-14 and Hwasong-15 intercontinental ballistic missiles in 2017. Both ICBMS are believed to have ranges capable of reaching continental North America, and serve as key elements in Pyongyang’s strategy of deterrence against the United States.