Celebrating creator of hanok for the masses

Celebrating creator of hanok for the masses 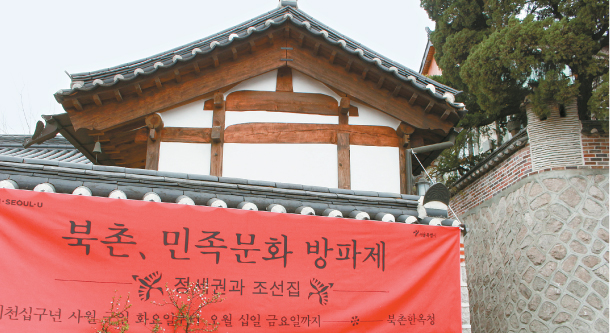 A special exhibition on the works of Chung Se-kwon, a real estate developer who helped develop smaller units of hanok (traditional Korean houses) throughout Seoul during the Japanese colonization period (1910-1945), is being held at Bukchon Hanokcheong in central Seoul through May 10. [SEOUL METROPOLITAN GOVERNMENT]

Between the time that Yu Gwan-sun called for the independence of Korea in 1919 and Kim Koo served as the last president of the provisional government of Korea from 1940 to 1947, Korea had yet another independence fighter - a real estate developer who reinvented the traditional Korean hanok house.

“Chung Se-kwon was one of the developers who created the clusters of hanok you see in Bukchon, Ikseon-dong, Gahoe-dong [in central Seoul] and more,” said Kim Kyung-min, a professor of urban development at Seoul National University, during a lecture hosted by the city government on April 9. “According to his daughter, Chung often said, ‘We need to stop the Japanese from taking over Jongno. One way to do that would be to have more Koreans in the area.’”

The Seoul Metropolitan Government is hosting lectures and an exhibition about Chung’s legacy in Bukchon hanok village in central Seoul until May 10.

“In the early 20th century, the population of Kyeongseong [Seoul’s name at the time] grew exponentially,” Kim said. “Part of it was because new factories were being built in the city that attracted workers from rural areas. Then there was the addition of Japanese people moving into the city. Many landowners began to sell their land, a lot of the time to Japanese people.”

Chung was the CEO of the real estate company Geonyang which was established in 1920 and remained active until the early 1940s. His strategy was based on splitting up large hanok houses into smaller residences so that more people could live in them.

“Chung would buy large-sized hanok houses in Seoul, then split them into smaller hanok houses that could be bought at a more affordable price by more Koreans,” the Seoul city government said in a statement. 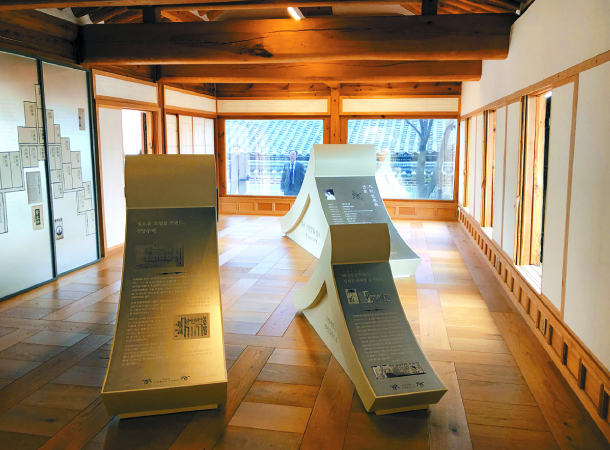 An exhibition inside Bukchon Hanokcheong in central Seoul sheds lights on Chung Se-kwon’s work of preserving and expanding hanok houses and the Korean language during the Japanese colonization of Korea (1910-1945). [ESTHER CHUNG]

Although the exact number of the hanok clusters Chung developed is not known, experts say he may have developed 35 percent of the new hanok residences that were built during the Japanese colonial period.

“In 2000, there were about 2,200 hanok houses built by Chung that were left in the city,” said Kang Maeng-hoon, head of the urban regeneration bureau of Seoul Metropolitan Government, during his lecture on April 9. “Today we have around 900 left.”

Many of the hanok structures were lost due to the waves of development that reshaped Seoul. It was only in 2000 that the city government began placing regulations on hanok renovation.

The extent of Chung’s work on hanok is detailed in the exhibition hosted by the city government at the Bukchon Hanokcheong, a publicly-owned hanok that hosts various events. The building can be reached by walking some 10 minutes north from exit No. 2 of Anguk Station, past Jaedong Elementary School. The exhibition is open until May 10.

“The Bukchon Hanokcheong will serve as a museum during this time to shed light on Chung’s work in three sections,” the city government said in a statement. “The first section will be on Chung’s work on the hanok homes, especially on how he bought large-sized hanok houses and divided them up into smaller hanok houses.”

The exhibition is also sharing information on Chung’s support of the local retail industry and grassroots efforts to preserve the use of the Korean language during Japanese rule. For his efforts to preserve Korea, Chung was imprisoned in 1942 and had his land confiscated in 1943.

Unfortunately, most of the information at the exhibition is in Korean, so foreigners may have trouble understanding it.

When the reporter visited the exhibition when it opened on April 9, a number of foreigners walked in and out of the hanok house holding the exhibition. When asked if she knows what the house is for, a tourist from China replied, “It’s just a traditional house of Korea, just like the ones we have in China.”

“We saw some descriptions, but we cannot read Korean,” said Herman Hondebrink from the Netherlands.

An English booklet will be placed on the site, the city government said.

“The buildings here are beautiful,” said Jip van Doornewaard, also from the Netherlands, who was visiting the site with Hondebrink. “It’s a pity that they do not seem to be building more structures throughout the city in this traditional style.”

Hanok, while beautiful on the outside, do pose some problems for residents.

“It is not easy to live inside a hanok built in the 1920s because we have new, modern needs and lifestyles,” Kim said.

“In the hanok renovation department of the city government, one of our biggest concerns is how to help the residents of hanok feel proud and happy to live in hanok,” Kang said. “The structures are beautiful on the outside. But there are issues inside.”

The city government has been providing funds for interior renovations of hanok. The city government’s next lecture on Chung, scheduled for Saturday, will be on Chung’s work on preserving the Korean language. The last of the lecture series will be held on April 27 and will focus on the architectural details of smaller clusters of hanok that emerged in Seoul during the Japanese colonization period.

The two-story house that hosts the lectures, located adjacent to Bukchon Hanokcheong, has a story of its own.

“This building was built during the colonial period and is an example of new structures that were built by Japan in that time,” said Seo Hae-sung, director of the city government’s program to remember the centennial of Korea’s March 1 independence movement. “Many buildings would have looked like this building in this area if developers like Chung didn’t protect and expand hanok structures.”

The second floor of the building is usually run as an observation deck for visitors to view the hanok houses in the area.

“What my grandfather did, he did to carry out his responsibility to society,” said Chung Hee-yeong, grandson of Chung Se-kwon. “I hope many in this new generation will follow his footsteps.”