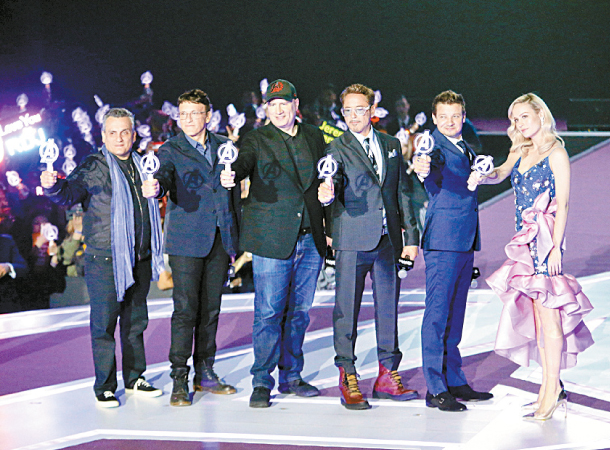 With just five days to go, over one million people have reserved their tickets for Marvel’s “Avengers: Endgame,” according to statistics released by the Korean Film Council on Friday.

The number of reservations for the upcoming movie surpassed the one million threshold on Thursday evening at 6:53 p.m., just three days after presales began on Tuesday.

The presale ticket numbers have exceeded the record set by last year’s “Avengers: Infinity War,” which surpassed one million ticket presales in 12 days.

Reservations for the film account for 93 percent of the total local box office sales.

When national movie theater chain CGV opened reservations for IMAX, 4-DX, and 3-D screenings of the film at 5 p.m. on Thursday, its website froze due to the flood of users logging on.

At the same time, CGV posted a warning on its website saying that if anyone was caught reselling tickets at a higher price, the company would take necessary measures against the transgressors.

“If someone is caught reselling tickets, the tickets will immediately be canceled while [those responsible for the resale] will face limitations or even withdrawal from the membership,” wrote CGV.

The theater conglomerate’s warning comes in light of ticket scalpers who have been illegally reselling tickets to the film at higher prices online.

Some people have been buying tickets at a price of over 100,000 won ($88) for an IMAX screening, according to a post on Joonggonara, a popular secondhand dealing site in Korea.

An IMAX screening ticket at CGV costs an average of 18,000 won.