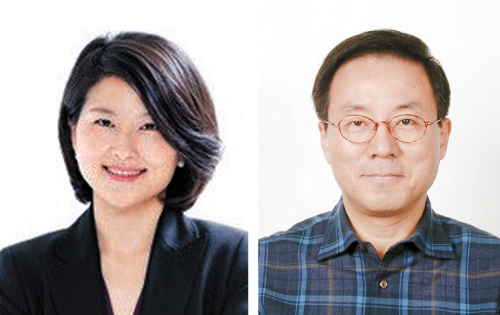 The organizational moves are being made as the company deals with sizable and growing operating losses and needs to better manage rapid expansion. It is seen as too large now to be directly managed by one person.

In their new positions, Jeong and Go will have executive authority over the areas they manage.

After joining Coupang in 2014, Jeong created and developed the company’s Rocket Pay payment system. Go has been involved in HR at various firms, including Hite Jinro.

“We decided to make the appointments as part of the company’s effort to raise professionalism in different areas of the business as we get bigger in size,” said a spokesperson for Coupang. “We thought the appointments were necessary to be able to make quick decisions.”

The appointments may be related to the company’s snowballing losses.

“Coupang last year broke 4 trillion won [$3.5 billion] in revenue, but it is continuing to report massive operating losses,” said Seo Yong-gu, a professor teaching business at Sookmyung Women’s University. “Industry insiders say that Coupang will be able to enjoy profits when its sales hit 10 trillion won. The company is seen to have made the decision as it has grown too large for a single person to control.”

“Coupang’s recent appointment is a unique management structure for a firm. It is seen as the company’s countermeasure for the struggles and criticisms it receives for its massive losses,” Seo added.

According to a public announcement on Monday, Coupang’s annual revenue last year hit 4.42 trillion won while its operating losses crossed the trillion won line. Coupang, founded in 2010, has never been in the black, but its spokesperson explains that the losses have been “expected” and that it they related to “long-term investment.”