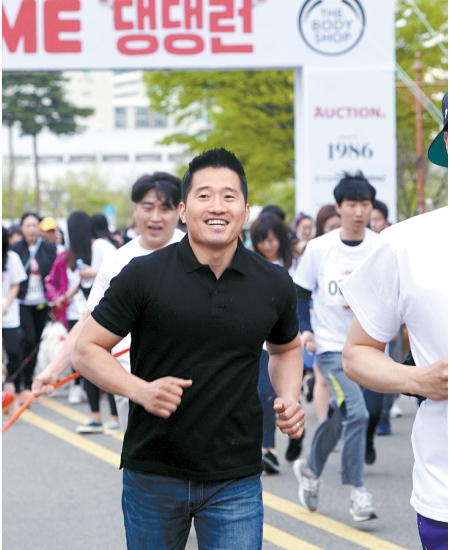 Kang Hyung-wook, a prominent dog trainer, runs at last year’s Dang Dang Run. The event, where owners run alongside their pets, seeks to raise awareness about abandoned dogs. The event will be held at World Cup Peace Park in Sangam-dong, western Seoul, on Sunday. [BODEUM COMPANY]

The festival will include a seminar by Kang, also known as the President of Dogs, a concert and a dog-dancing performance.

The highlight of the festival is the 5-kilometer (3.1-mile) Dang Dang Run, where owners run with their dogs. The event will be held at World Cup Peace Park in Sangam-dong, western Seoul.

“Have you ever played Tetris, where you would press the restart button until a block that is shaped how you want appears?” Kang said. “People these days act the same way around dogs. They abandon the dog when they don’t get along with them and adopt a new one.”

According to Kang, Korea’s abandoned dog problem is unusual. Kang said the reason why there are large numbers of stray dogs in Korea is because they breed in rural areas or industrial complexes. The numbers also increase due to dogs discarded from farms that raise dogs for meat, which makes it hard to keep track of their numbers.

“The control system [for pets] in Europe is managed well, as it is rare to see a dog roaming around the streets alone,” Kang said. “The continent has a system where wild dogs on the streets without an owner will be caught and used to track down their owners through their implanted chips, whom will be given a fine or a warning.”

Kang added that a system to monitor the number of abandoned dogs is needed in Korea.

The theme for this year’s Dang Dang Run is helping abandoned dogs, but Kang’s message is not limited to caring about strays alone.
“To only tell people to adopt an abandoned dog can be misunderstood to mean that people who don’t adopt them are heartless,” Kang said. “To tell people to not abandon their pets is also not the answer to this problem, because if owners don’t get along with their dog, it is better to give them away to those who can take care of it better.”

Kang also pointed out that talking about abandoned dogs might have the opposite effect and create more puppy mills.

“Talking about abandoned dogs can make people want to raise dogs,” Kang said. “However, in reality, cases where people adopt abandoned dogs are low because a new-born puppy can be adopted with a click of a button on the internet.”

“There will be more abandoned dogs in the future,” Kang concluded. “Through festivals such as the Dang Dang Run, I hope people can keep good manners and experience what it is like to live with a pet.”

The Dang Dang Run will begin at 8 a.m. on Sunday. The Dang Dang festival is hosted by Bodeum Company and is sponsored by the JoongAng Ilbo.