President Moon Jae-in on Friday rammed through the appointments of two Constitutional Court justices whom lawmakers refused to confirm.

Moon formalized the appointments of Lee Mi-sun and Moon Hyung-bae to the bench of the Constitutional Court around 12:40 p.m. on Friday, Senior Presidential Secretary for Public Affairs Yoon Do-han said. 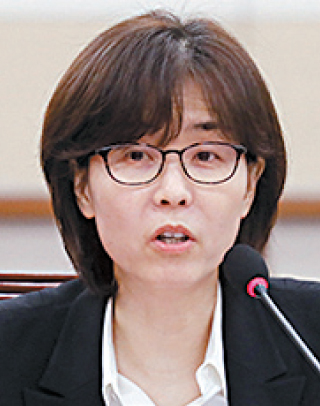 “In order to prevent vacancies in the Constitutional Court, Moon, currently on a state visit to Uzbekistan, used the electronic signature system to approve the appointments,” Yoon said.

Those appointments brought the number of top officials Moon rammed through without National Assembly conformation hearing reports to 15. Since he took office in May 2017, Moon named 11 minister-level officials and four Constitutional Court judges without getting lawmakers’ blessings, which is legal.

During the confirmation process, lawmakers scrutinized Lee and her husband’s wealth, especially allegations that they had used inside information from trials they were involved in to invest in stocks. Lee and husband Oh Choong-jin together own 4.26 billion won ($3.76 million) in assets, of which 83 percent are in equities. Oh, a former judge, is now a partner at one of Korea’s largest law firms.

The conservative opposition Liberty Korea Party (LKP) and Bareunmirae Party have asked the prosecution and financial authorities to open criminal investigations into the couple’s investments.

Both nominees failed to obtain National Assembly confirmation hearing reports by the statutory deadline on Monday.

Before leaving on a Central Asian trip on Tuesday, Moon asked the National Assembly to send the reports by Thursday, which didn’t happen.

Justices Lee and Moon started their six-year tenures on the Constitutional Court immediately after Moon signed off their appointments on Friday. They replaced Seo Ki-seog and Cho Yong-ho, picked by Moon’s predecessor Park Geun-hye in 2013. Their terms ended Thursday.

The LKP has fiercely protested Moon’s picks. Earlier Friday morning, Rep. Na Kyung-won, floor leader of the LKP, said Moon insisted on the appointments because they “are the final pieces to complete Moon’s puzzle to create a leftist dictatorship.”

It takes six out of nine Constitutional Court justices to rule a law unconstitutional, and Na said Moon has secured the magic number.

“The Moon administration will no longer have any reason to struggle in the National Assembly to revise laws,” she said. “It can just file constitutional petitions against laws it does not like and rule them unconstitutional.”

She said the liberals had argued to scrap the National Security Act during the Roh Moo-hyun administration, but it doesn’t have to go through the National Assembly anymore. “With a Constitutional Court ruling alone, it can bypass the legislature,” she said, arguing that the Moon administration is now capable of incapacitating the independence of the judiciary.

As of Friday, eight of nine judges on the Constitutional Court have been replaced since Moon’s presidential term began. Justice Lee Seon-ae is the only remaining judge appointed by Moon’s predecessor. Her term ends in 2023.

The two new judges, Lee and Moon, are both considered liberal. Justice Moon served as head of the Society for Research on Our Law, a study group of progressive judges. Lee is known as a labor law expert. “We hope the court remains free of ideological biases,” Chang Young-soo, a professor at the Korea University School of Law, told the JoongAng Ilbo. “But it is true that concerns are still there.”

Kim Moon-hyun, an honorary professor at Ewha Law School, disagreed. “Judgments change depending on the flow of an era,” Kim said. “It is natural for Constitutional Court justices to change, and it is also natural for them to be swayed by political ideologies.”