‘Someone will have to die before the cops help us’

‘Someone will have to die before the cops help us’ 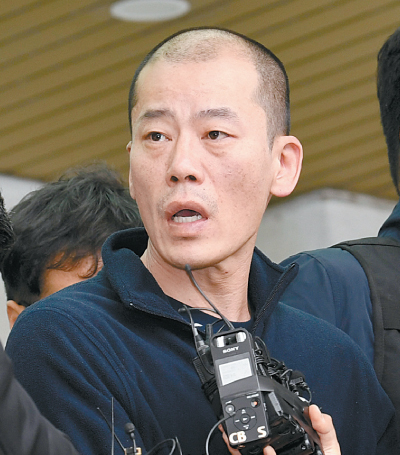 The Jinju arson-murder suspect after police decided to reveal his face to the public on Friday. [SONG BONG-GEUN]

The summer of 2018. That’s when 42-year-old Ahn In-deuk turned conspicuously volatile, neighbors of the arson and mass murder suspect recall.

Nobody knows exactly what happened to Ahn, whose full name and face were revealed to the public for the first time Friday by police. But it’s around that time, neighbors say, that he began yelling expletives at passersby from his veranda and harassing the family living on the floor above him by hurling a concoction of his urine and excrement at their front door. Ahn’s rationale is still unclear.

In the midst of all his weird behavior, neighbors say Jinju police ignored their complaints. Ahn’s neighbors called the police number, 112, five times since he moved into the apartment complex in Jinju, South Gyeongsang, in December 2015. Most of the calls were made within the past year.

Yet Ahn was booked only a single time for property damage on March 12 after he was caught on CCTV throwing his feces. (That case has not been resolved.) In the four other calls, neighbors say, Ahn didn’t get in trouble because physical violence was not involved.

Ahn was a tinderbox, they say. And it was only a matter of time before he went up in flames.

“Most people here knew he had some sort of a mental problem,” said one neighbor. “But the police wouldn’t do anything about it even if we reported complaints to them. Everyone was like, ‘Somebody will have to get killed for the police to be mobilized.’”

The neighbor, who spoke on condition of anonymity out of fear for his own safety, told the JoongAng Ilbo that he was responsible for one of the calls to the police about Ahn. His recent complaint was on March 8. He was walking through the apartment parking lot with his family when he felt someone staring at them.

“I asked him, ‘What are you looking at?’ and he suddenly started cursing me and followed me to my apartment building.”

The neighbor lives in building No. 302, while Ahn lived on the fourth floor of a 10-story building, No. 303. That call to the police had no impact and 40 days later, the tinderbox burst into flames. Last Wednesday, Ahn poured gasoline all over the living room of his fourth floor apartment, set fire to a piece of newspaper and hurled it on the flammable liquid at around 4:30 a.m. on Wednesday.

Ahn walked down to the second floor and stood in front of an elevator, stabbing neighbors escaping down the staircase.

Five were killed and six were injured. Nine others are still receiving medical treatment for smoke inhalation. Jinju police said Ahn was diagnosed with schizophrenia in 2010 and received treatment for the mental disorder at a Jinju psychiatric hospital until July 2016 but did not seek medical attention since.

Officers at the Gyeongnam Provincial Police Agency said Friday Ahn is currently going through a psychiatric test. He has told police and the local press that he committed the crime “out of anger” because he had been “disadvantaged” by the Jinju city government, society and a former employer, without detailing how.

Families of the neighbors killed by Ahn called on police authorities Friday to issue an official apology for failing to heed the warning signs and threatened to delay the funerals until the Jinju police chief or national police chief admit their wrongdoings.

As for Ahn, he won’t be allowed to wear a facial mask in front of media cameras now since police decided to show his face to the public. Under domestic law, a suspect of a specific violent crime can be forced to have his or her face and personal information publicly unveiled if the crime was committed in a cruel way; when sufficient evidence exists to prove that the criminal suspect has committed such crime; and when the disclosure should be required for the public good.

BY LEE EUN-JI, WE SUNG-WOOK AND LEE SUNG-EUN [lee.sungeun@joongang.co.kr]