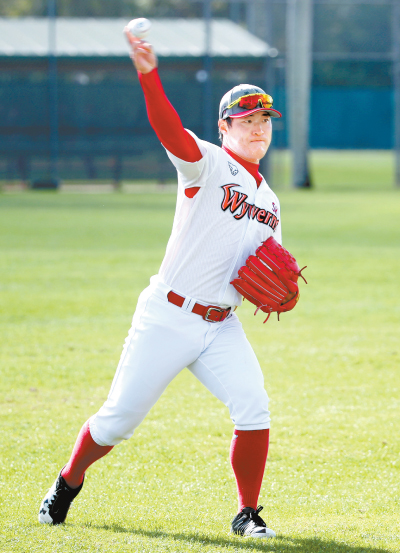 Former Chicago Cubs outfield prospect Ha Jae-hoon has come a long way to reach the mound in the KBO, and the 28-year-old says he couldn’t have done it without help from a veteran who took Ha under his wing in the United States.

Ha, currently pitching for the SK Wyverns, signed with the Cubs out of high school as an outfielder in 2008, and he reached Triple-A in 2013. Injuries derailed his hopes of reaching the bigs and Ha, always known for his rocket arm, decided to give pitching a try.

At a time when he had trouble harnessing his raw talent and a million different thoughts were running through his mind, Ha leaned on a fellow Korean player who was also in the Cubs’ minor leagues in 2013, right-hander Lim Chang-yong.

Lim, already 37 then, was called up to the majors later in 2013. He was living out of a suitcase at a hotel, and Ha was his roommate.

“I was going through a tough time, and I learned so much from him,” Ha said Thursday of his connection with Lim, who retired earlier this year at 42, having also pitched in the KBO and Japan’s Nippon Professional Baseball (NPB) during his 24-year pro career.

Ha said he sought Lim’s advice, and the veteran’s response was straightforward.

“He told me to stay within myself, do the best I can and not to look too far down the road,” Ha recalled.

Ha put up solid numbers in his one minor league season as a pitcher, going 3-0 with a 2.33 ERA in 16 appearances in low-A ball in 2015. But he never reached the majors and ended up with NPB’s Yakult Swallows - incidentally, Lim’s former team - for one year in 2016 as a hitter.

Then, last September, the Wyverns drafted Ha as a pitcher, a gamble that has paid off so far this season.

In 10 appearances out of the bullpen, the right-hander has gone 3-1 with a 4.15 ERA. He was the winning pitcher on Opening Day last month.

“I’ve tried to keep Lim’s words in my mind,” Ha said. “I knew it was going to be challenging to try to return to the mound so late in my career. But I’ve learned not to get too ahead of myself.”

In Thursday’s game against the Doosan Bears, Ha got a crucial out to get out of a bases-loaded jam in the eighth inning with the Wyverns nursing a 4-3 lead. With two outs, Ha battled Ryu Ji-hyuk to 10 pitches before getting him to ground out to second base. The Wyverns hung on to win by the same score.

“I am trying not to underestimate or overestimate myself,” Ha said. “Whenever I pitch, I try to picture the best version of myself.”