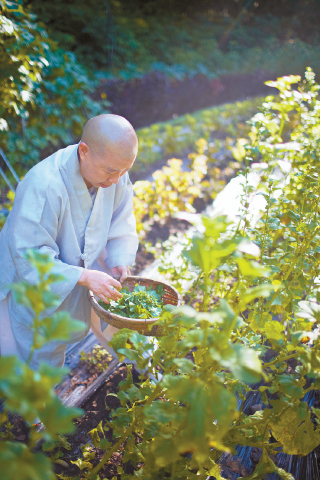 While temple food has recently become the ideal diet in the eyes of people who are health-conscious, it has long been seen as nothing more than food that monks eat at temples located in or around the mountains. Since monks farm or gather ingredients that are in season for their meals, being at a temple can help people understand the ideas and methods that go into the cuisine.

To help those who want to know more, the Cultural Corps of Korean Buddhism provides many opportunities to learn. Those looking for a simple meal similar to what monks eat everyday can visit Balwoo Gongyang, a Michelin-starred restaurant the organization runs in central Seoul. Those who want to do more than just eating food can take the cooking classes that are available at the Korean Temple Food Center in central Seoul’s Jongno District. There are more more in-depth experiences available at temples specialized in food.

If you are looking to make a quick visit, Jinkwan Temple in Eunpyeong District, northern Seoul, is the place to go. The temple is under the direction of Gyeho Sunim, or monk Gyeho, who is designated as a temple food master. The temple used to be home to a dubu (tofu) maker because the particular food was needed for a religious ritual. For that reason, the temple is known for serving a variety of dishes using dubu. For more information, visit www.jinkwansa.org.

Although a train ride is required, a temple that many foodies want to visit is Baekyang Temple’s Cheonjinam, where an episode of the hit Netflix series "Chef's Table" was recorded with Jeongkwan Sunim, The monk, who has cooked in collaboration with globally-known chefs like Eric Ripert of Le Bernardin in New York, welcomes visitors to the temple who wish to take a look at what they saw in the show.

There is an overnight temple stay program available that offers time with Jeongkwan Sunim. Visitors get to cook together on the second day at Cheonjinam after the first night spent at Baekyang Temple. The two buildings are about 10 minutes walk away from each other.

She became familiar to a broader audience recently after appearing on an episode of the popular TV show “I Live Alone.” On the show, comedian Park Na-rae visited the temple to learn more about what makes temple food.

Many chefs who want to learn more about a variety of Korean food come and stay for weeks and even months to study from the monk as they prepare how to present Korean food in new ways to local and international diners. For more information, visit baekyangsa.kr.

Bongsun Temple in Namyangju, Gyeonggi, is known for its wide variety of food programs. It offers two regular cooking classes every Tuesday for two hours to anyone who’s interested in learning more about temple food. The temple also offers a stay that includes a cooking class using seasonal ingredients.

Those who participate in the temple stay also get to be a part of a mediation program in the forest as well. For more details, check out www.bongsunsa.net.

Those heading southeast of the country can visit to Donghwa Temple in Daegu. Located at the foot of the city’s Mount Palgong, making temple food is part of a two-day temple stay program. The cooking class is offered on the second day of the stay, and at least four people need to participate to open a class. For more information, go to donghwasa.net.

To make it easier for visitors, the cultural corps is planning to host a special temple stay program that offers a bus ride from Seoul to the temple. For 10,000 won ($8.80), you can join a tour group to Jinkwan Temple on April 30.

The bus leaves from the Templestay Information Center located across from Jogye Temple in central Seoul, and the program includes lunch, a tour guide, a translator and even some souvenirs to take back home. There is also a tour to Bongsun Temple on May 11 for 10,000 won. Both are day trips. For more information about special offers and to make a reservation, visit www.templestay.com or call (02) 2031-2000.