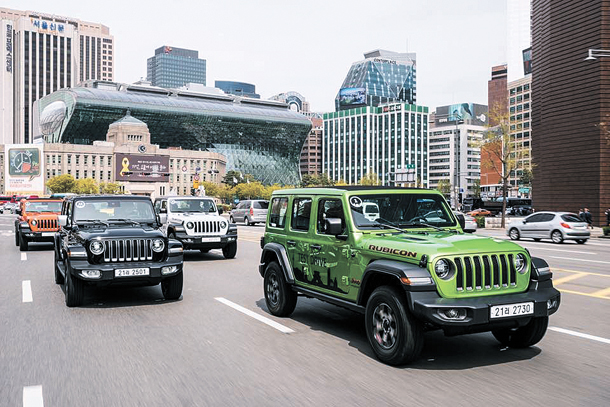 Jeep’s all-new Wrangler, the first fully revamped generation of the brand’s iconic off-roader in 11 years, rocks both on and off the road, but only if you have the guts to handle the car’s raw power on crowded urban streets.

While four versions of the latest Wrangler were introduced in Korea in August last year, the automaker rolled out three additional versions of the car, including the Wrangler 2-Door, Overland 4-Door - an upgrade from the Wrangler Sahara - and Power Top 4-Door just last week, making a total of six Wranglers available on the Korean market. 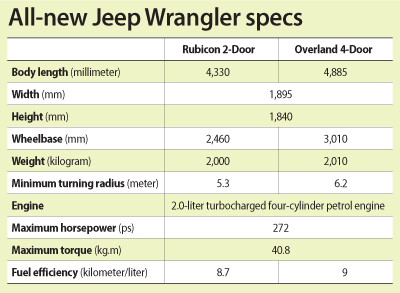 The Wrangler 2-Door comes in both a Rubicon and Sport option. The Rubicon offers more off-road-oriented specs.

The expansion of the lineup comes as the brand hopes to reach out to a broader range of customers including city dwellers looking for sport-utility vehicles (SUVs) for everyday life, on top of its original fan base of off-road enthusiasts.

CEO Pablo Rosso of Fiat Chrysler Automobiles Korea, which sells Jeep, said the company’s approach to “enlarge the customer base has been working,” and that it intends to strengthen the strategy further with the newly added Wranglers during a media event held Wednesday in central Seoul.

In a test drive on Thursday, the Korea JoongAng Daily had a chance to drive two models - the Rubicon 2-Door and Overland 4-Door - on a 110-kilometer (68-mile) round-trip route starting from Gwanghwamun in central Seoul to Yangju in Gyeonggi.

Even before starting the test drive, it was evident what Jeep wanted to show off this year, as the driving route didn’t go beyond the outskirts of the greater Seoul area. Last year, the SUV maker took reporters out to the rivers and hills deep inside a forest in Gangwon for a real taste of off-road driving, but this year it was all about the city.

This reporter started-off the drive in the Rubicon 2-Door, which still has the rough edge the Wrangler is known for, and came back to Seoul in the Overland 4-Door, a car designed for more urban drivers, to see how each variation was fitted to suit different target customers. 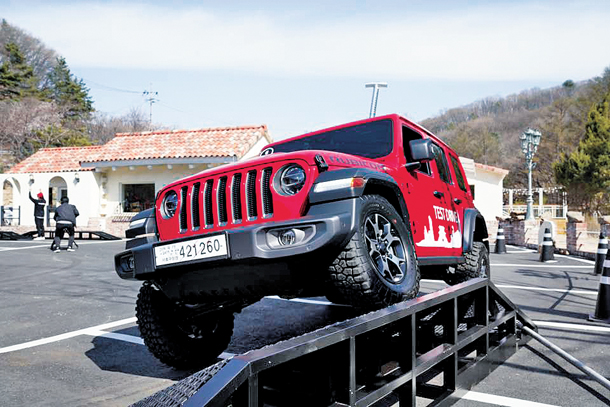 Driving the Wrangler Rubicon 2-Door felt like an off-road experience in the middle of Seoul, as tires designed to be driven off-road offered a bumpy ride even on the capital’s well paved streets.

Even when driving in a straight line, it seemed necessary to keep a firm grip on the steering wheel and constantly adjust the car to keep it in the middle of the lane.

A press officer from FCA Korea said the 2-Door is most true to the symbolic off-road heritage of a Wrangler and “it constantly makes drivers focus on driving,” adding that is the part off-road fans enjoy about the car.

The car was very sensitive, both in terms of steering and accelerating. It easily sped up to 100 kilometers per hour (62 miles per hour), even without really stepping on the accelerator. For a less-sensitive sedan driver, this responsiveness caused problems at the beginning of the journey as the car shot off or turned too far. The power and responsiveness of the 2-Door seemed a bit wasted in the city, but it really can’t be considered a disadvantage to have a car too powerful and agile on any road.

The car was quite noisy, even without much acceleration, but not too noisy considering it’s an off-road car. The inevitable growling grew to its loudest as the car sped up to beyond 120 kilometers per hour, but for dynamic drivers the sound would likely be more fun than the space-like quietness of an electric car.

As the seating position in the 2-Door is quite high, even compared to other SUVs, the vehicle felt bigger than it actually was. The Rubicon 2-Door is about 650 millimeters (25 inches) shorter in length and 80 millimeters narrower in width compared to large SUVs like the Palisade from Hyundai Motor, but 90 millimeters taller. Still, there was no problem in cornering or passing through narrow tollgates after some adjusting. Rather, the higher seating position gave a clear view of the road, aiding driving.

The backseat, which has been criticized on previous models as being rigid with little legroom, was improved with a more comfortable angle and 30-millimeter larger leg space compared to the previous generation. There was more than enough room for this 165-centimeter-tall (5-foot-5-inch) reporter to slouch in the back row.

While Wranglers are not particularly fuel-efficient cars, the company tried to increase its efficiency by adjusting the windshield angle to improve aerodynamics. On the official spec table, the Rubicon 2-Door’s combined fuel-efficiency is 8.7 kilometers per liter (20.5 miles per gallon). On this reporter’s drive through urban roads and highways, the car actually achieved 10.5 kilometers per liter efficiency, which is not bad for an off-roader.

The returning trip in the Overland 4-Door felt rather dull after the 2-Door experience.

It did feel safer as the car didn’t have the bumpiness of the smaller model and offered a smoother ride overall, even when crossing speed bumps at full speed.

Yet this doesn’t mean that the Overland has completely given up on its off-road roots.

When this reporter tested the car on three artificial off-road tracks called rolling, steep slope and bumpy, the Overland was able to pass through without difficulty. The rolling track, which sees three of four wheels unable to get traction, was especially impressive as the SUV was still able to drive with just one wheel on the road. From the driver’s perspective, it didn’t even feel like three other wheels were off the track. While testing the off-road features, the car drove in four-wheel drive mode, though it was in two-wheel drive mode for the test drive.

It’s not just fuel efficiency and looks that Jeep has fine-tuned to make the rough Wrangler ready for a day out in the big city; the Overland also comes with advanced driver assistant features like adaptive cruise control, a premium speaker system and active noise control, which are not adopted by 2-Door model.

As for the car’s exterior, Jeep added a bright silver lining around the seven-slot grille, rather than the monotone design applied to other cars, to give a trendier look. Jeep’s iconic tire on the back of the car is covered by a smart hard cover on the Overland, a notable departure from the rugged soft cover look on the other Wrangler model.

The Overland also comes with a step to reach the door, helping city folks make a more dignified entrance. Other Wranglers don’t have the step because it could get in the way of the off-road experience.