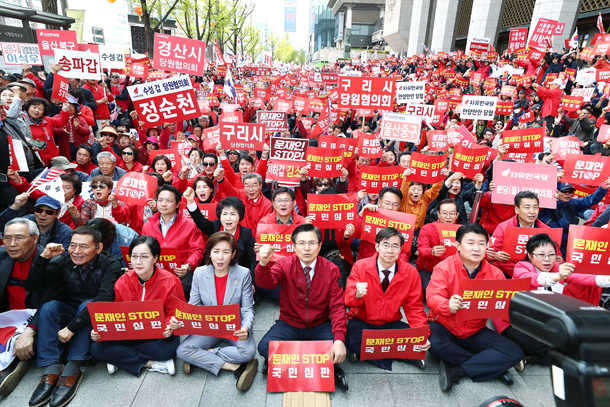 At a large rally held by the LKP at Gwanghwamun Square on Saturday, Hwang claimed Moon was “running around everywhere asking for sanctions on North Korea to be lifted,” and said the president was acting as “[North Korean leader] Kim Jong-un’s spokesman.”

According to a local outlet, a senior official at the Blue House decried Hwang’s words, saying they were only the latest in a recent series of extreme remarks from the LKP. That includes floor leader Rep. Na Kyung-won’s similar comment in a National Assembly address and those made by lawmakers insulting the victims of the May 18 Democracy Movement and the Sewol ferry disaster.

Hwang, who has not shied away from harshly criticizing the Moon administration since taking over the LKP leadership in February, said at the rally he would continue to “fight until the leftist dictatorship of the current administration comes to a close.”

The remarks invited heavy backlash from the ruling Democratic Party, whose spokesman on the floor, Rep. Kang Byung-won, called Saturday’s rally a form of “antiquated politics” filled with McCarthyist ideology that he claimed proved that the LKP was a “party with no future.”

Analysts say the recent string of extreme remarks from the LKP, which some civic activists have called hate speech, may be aimed at rallying conservative sentiment in South Korea ahead of the legislative elections next year.

The party has shown relative unity under Hwang, who was the last prime minister to serve under former deposed President Park Geun-hye. Hwang hopes to ride an anti-Moon platform to emerge as the largest party in the National Assembly, with the next presidential elections in 2022 in mind.

Some on the left have argued that Hwang may be dialing up his assault on the Blue House to deflect public attention away from his own political controversies, like the allegation that he was involved in a major cover-up while serving as the Justice Minister in the former administration, during which his former deputy was investigated for a sex scandal.

Hwang also faces accusations that he may have been part of the Park government’s attempt to obstruct a fact-finding inquiry into the sinking of the Sewol ferry in 2014. The allegation prompted two LKP members - including a sitting lawmaker - to recently say they were disgusted at the victims’ families’ calls for justice.