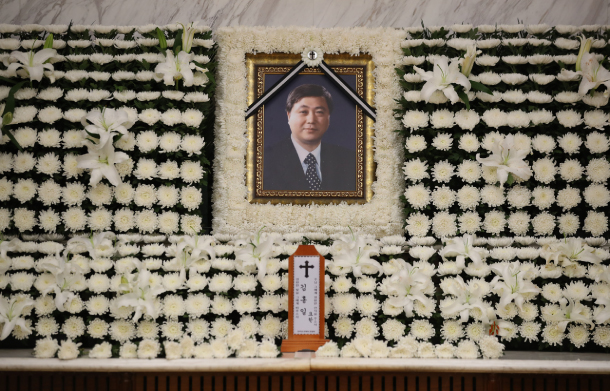 A local fire station said that it received a report at around 4 p.m. that Kim had collapsed at his home in Mapo District, western Seoul.

He was immediately transferred to a nearby hospital, where he was pronounced dead about an hour later. The exact cause of his death has yet to be confirmed.

Kim, a three-term lawmaker, had suffered from Parkinson’s disease for years, apparently stemming from complications caused by torture during past authoritarian regimes in the ’80s.

Kim entered politics in 1996 when he was elected as a lawmaker for Mokpo, a southwestern town known as a stronghold for the Millennium Democratic Party, the predecessor of the current ruling Democratic Party.

He lost his parliamentary seat in 2006 after he was sentenced to a suspended jail term in connection with an influence peddling scandal. He was granted presidential amnesty a year later.

His relationship with his late father went beyond the usual father-son connection. Kim served as a key aide to his father during his turbulent years in the opposition, when he suffered oppression and close surveillance.

Kim Dae-jung served as president of South Korea from 1998 to 2003, and passed away in 2009. He was known for his lifelong commitment to fighting for democracy and improving inter-Korean peace. He held the first-ever inter-Korean summit in 2000 with Kim Jong-il, the North Korean leader at the time.

“Kim had long devoted his life to our democracy and peace on the Korean Peninsula,” Rep. Hong Ik-pyo, spokesman for the ruling Democratic Party, said.

“Many people who know his patriotism and work in parliament will be greatly saddened,” Rep. Min Kyung-wook, LKP spokesman, said. “We pray that he will rest in peace.”

He is survived by his wife and two daughters.