Tottenham Hotspur’s offensive star Son Heung-min isn’t just beating opposing defenders and goalkeepers these days. He prevailed over a Korean legend from the 1980s in a poll released Monday. 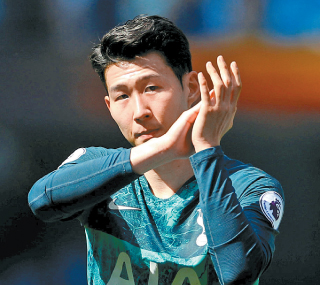 Son Heung-min of Tottenham Hotspur applauds fans after the match against Manchester City on Saturday. [REUTERS/YONHAP]

Realmeter polled 500 Koreans over the age of 19 last Friday on who they thought was the better player between Son and former Bundesliga forward Cha Bum-kun, nicknamed Tscha Bum.

The poll has a confidence level of 95 percent and a margin of error of 4.4 percentage points.

Son is in the midst of a strong campaign with Spurs, having netted 20 goals in all competitions this year, including a pair that helped send Tottenham to the semifinals of the UEFA Champions League last week. Son has scored the most goals among Asian-born players in Champions League history with 12.

Cha, who spent 11 seasons in the top German league with three clubs, still holds the record for most career goals by a Korean player in Europe with 121.

With 21 goals during the 2016-2017 season, Son broke Cha’s record for most goals by a Korean in a European season by two. Son is also closing in on Cha’s all-time record of 121, sitting just five from equaling that mark.

Cha has long been considered the greatest football player Korea has produced.

Son is having another outstanding season with Spurs, already scoring 20 goals with just a little less than 10 matches remaining in the season. Despite missing quite some time to play for the national team, Son has been one of the hottest players for Spurs, successfully filling Harry Kane’s shoes when the striker was out injured.

Looking at Son’s current pace, it is highly likely that he will have another career best season, as he is one goal shy of tying his record for 2016-17.

While Son may be the best Korean player in the history of the Premier League, the Professional Footballers’ Association (PFA) did not include him in the six-player shortlist for its annual Players’ Player of the Year award.

“I can’t believe Son is not in the six, I really can’t,” Upson said on Football Focus. “I would be definitely choosing Son. I think he has been absolutely outstanding.”