U-20 team looking for a ‘challenge’ at World Cup

U-20 team looking for a ‘challenge’ at World Cup

The upcoming FIFA U-20 World Cup in Poland will be an opportunity for Korean players to see just how far they can go mentally and physically, their coach said Monday. 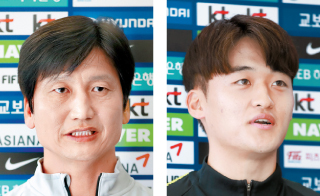 Chung Jung-yong opened training camp for his under-20 national team at the National Football Center (NFC) in Paju in Gyeonggi, north of Seoul. The camp roster currently has 23 players, with a couple more from Europe expected to join later this week.

The final roster of 21 will be announced early in May, and Chung’s team will depart for Poland on May 4 for the May 23-June 15 tournament.

“I’ve been with this group of players for two years, starting with the qualification, and we’ve gone through so much together,” Chung told reporters at the NFC before his first practice. “We’ve had some fun and we’ve also had to overcome some adversity. We’ll now try to challenge our limits at the U-20 World Cup.”

Korea has been paired with Portugal, Argentina and South Africa in Group F. Before the tournament, Korea will face New Zealand and Ecuador in tuneup matches.

Chung’s camp roster is an eclectic collection of collegiate stars and emerging pros in the first and second divisions in Korea.

The one name that sticks out from the group plies his trade in Spain’s La Liga: Valencia CF’s teen midfielder Lee Kang-in, who will join the national team Tuesday.

Chung traveled to Spain to meet with Valencia’s representatives over Lee’s release for the youth tournament.

The coach has also spoken with other European clubs in hopes of calling up their Korean youngsters for the competition, such as Jeong Woo-yeong of Bayern Munich in Germany’s Bundesliga and Kim Jung-min of FC Liefering in Austria.

“When I spoke to those clubs, I told them they should consider the development of their young players,” Chung said.

“And the teams agreed with me. In the case of Jeong Woo-yeong, he may not be able to join us right away because of his club’s schedule, but he should be with us for at least one match.”

In two pre-tournament matches against New Zealand and Ecuador - both U-20 World Cup contestants - Chung said the goal will be to boost the players’ confidence and improve their execution.

“We need to be a lot better conditioned than our opponents so that we can play strong help defense,” Chung said. “Since we’ll face superior opponents, the players have to go in with confidence and have to be able to execute our tactics.”

There are six groups of four, and the top two teams from each group, plus four best third-place teams, will advance to the round of 16.

This is the 22nd edition of FIFA’s signature youth tournament. Korea’s best performance came in 1983 in Mexico, where they placed fourth.

Korea hosted the previous U-20 tournament in 2017 and got knocked out of the round of 16.

The U-20 captain, Hwang Tae-hyun, said the objective is to reach the semifinals for the first time since that 1983 run.

“I’d love to beat Portugal in the opening match,” Hwang said. “If we make it out of the group, I think the path will open up for us to reach the semifinals.”