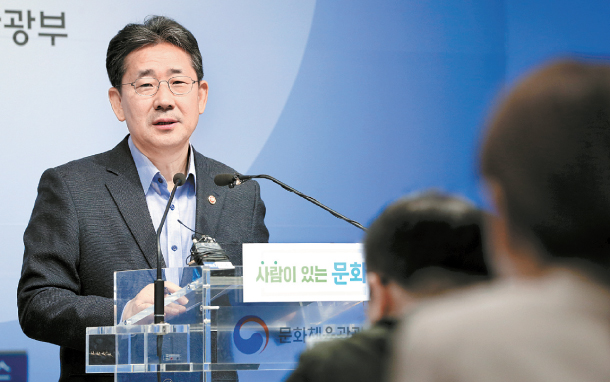 Park Yang-woo, the new minister of culture, sports and tourism, meets with local culture reporters for the first time after he took office on April 3 at the Government Complex in Sejong on Monday. [MINISTRY OF CULTURE, SPORTS AND TOURISM]

The Ministry of Culture, Sports and Tourism vows to ensure a free environment for artists and content creators in Korea, and to continue efforts in maintaining active cultural exchanges with North Korea, newly-inaugurated Minister Park Yang-woo said on Monday in his first meeting with local culture reporters at the Government Complex in Sejong.

Having taken office as the new minister on April 3 after former minister Do Jong-hwan, who laid out the ministry’s general roadmap, titled “Culture Vision 2030,” last year in May, Park said he would uphold the values set out by his predecessor and see to it that the policies from Culture Vision 2030 are made into concrete and detailed form. The ministry’s plans span six main fields: general cultural, cultural exchange with North Korea, the arts, content creation, the media and religious affairs.

“We emphasized the importance of freedom, diversity and creativity through our ‘Culture Vision 2030’ last year,” said Park. “Now my job is to realize that vision. And just as I revealed in my inauguration speech, I stress that culture is not just about the humanities, but a matter of the economy, and that it must come in harmony with the statistics.”

Financial support will be expanded for content creators, namely artists, to allow them to work free of financial pressures, Park said, while also alluding to the cultural Blacklist of artists made during the former conservative administration. “Our fundamentals lie on freedom and creativity. There will never be — and never can be — any interference or hindering of freedom to artists through the art and cultural policies,” said Park.

While he stated that most of the policies will be in line with the ongoing endeavors of the ministry, Park emphasized the importance of seeing how the results are derived rather than just the simple outcome — especially in their talks with North Korea.

“The cultural exchange between South and North is the most crucial to the two countries’ exchanges,” said Park. “We always look at what comes out of it, but what’s just as important is how it is done — how we prepare for it. The Ministry of Unification will lead the exchange, but we will be dealing with the content […] We will be prepared so that there can be exchanges made at any time. And even though no official body exists yet, we will be working with the related governing bodies.”

The ministry will also be putting forward regulations to limit the number of screens for each movie — commonly referred to as a screen quota — to ensure that smaller indie or art films also have a chance at competing with commercial films at local theatres. The Korean Council of Cineastes for Cultural Diversity and Monopoly Regulation had demanded the government withdraw its nomination of Park in March on grounds that Park had been a CJ ENM outside director from 2014 to 2018.

“Ensuring the diversity in film is crucial in developing our film industry. Our market is worth 5 trillion won [$4.38 billion] to 6 trillion won, but it’s half that offline, and half even that without the foreign movies […] We need diverse good movies to be able to get them out overseas. In that sense, I do feel the need for a screen quota. We are in talks with the National Assembly.”