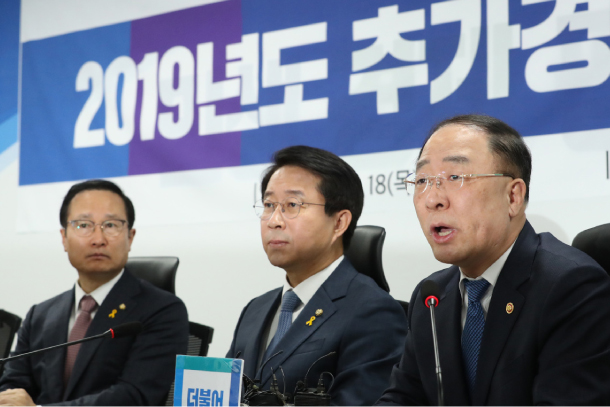 Deputy Prime Minister for the Economy Hong Nam-ki makes a speech at a consultative meeting between the government and the ruling Democratic Party at the National Assembly to draw up an additional supplementary budget. He said Korea’s economy still has strong fundamentals. [YONHAP]

“All the work of translation consists of weighing words,” said French writer and translator Valery Larbaud. “We place the author’s words alternately in one pan, and in the other, we try out an indeterminate number of words belonging to the language into which we are translating the author, waiting for the moment when both pans are balanced.”

It is difficult to translate a word in another language into Korean if one cannot find a word of a similar weight. “Trauma” and “fundamental” are such examples. As an economic term, fundamental means basic strength. It refers to the macroeconomic indicators of the health of the national economy, such as the economic growth rate, fiscal and trade balance and foreign currency reserve.

Those who oversee Korea’s economy like to say that economic fundamentals are strong. When Deputy Prime Minister for the Economy Hong Nam-ki met with the three global credit rating agencies on April 13, they agreed that the fundamentals of the Korean economy were good. Blue House Secretary for Economic Affairs Yoon Jong-won also said the same thing. In January, President Moon Jae-in said that macroeconomic indicators were good.

Despite the optimism, however, concerns are growing fast because of many unstable economic indicators. Until last month, exports decreased for four consecutive months. Despite the 82-month-long trade surplus, the margin is decreasing. The Bank of Korea has lowered the economic growth forecast for this year four times already. The growth rate of the first quarter, to be announced on Thursday, is not expected to be good either.

In September 1997, Michel Camdessus, the International Monetary Fund’s (IMF) managing director at the time, said in an interview with Korean media that the Korean economy’s fundamentals were good. Economic heads at the time said likewise. Yet in November of the same year, Korea requested a financial bailout from the fund.

A former economic official said that after the financial crisis, he had a trauma over fundamentals and did not use the word “fundamentals” anymore. When your vision is blurred by “fundamentals,” you may miss the approaching crisis. I hope no other official will suffer from the trauma of our economic fundamentals as a result.