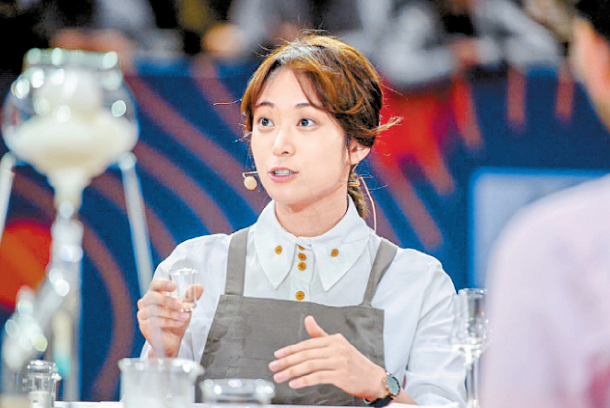 A Korean woman wowed judges at the 20th World Barista Championship (WBC) with a unique and creative performance.

“I planned to make everything unconventional - from decorating the interior to choosing the topic to how I would communicate with the judges,” said 32-year-old Jeon Joo-yeon, the first Korean to be named World Barista champion.

The competition was held in Boston from April 11 to 14.

She chose a low table and sat down so she could face the judges - not like a contestant but like a barista brewing coffee for a customer. Uttering “sensational” and “hip,” the judges said it was an unprecedented performance.

At this year’s WBC, baristas from 55 countries who passed the preliminaries competed with each other. In total, around 3,000 baristas participated. The contest does not offer prize money, but the honor the baristas get from the contest is huge.

Korea has been participating since 2003. Analysts from the coffee industry are delighted, saying that due to one barista, the status of Korean coffee has been raised.

“It is meaningful that, in a contest where everything is done in English, Korea won the world championship,” said Woo Jong-ho, the head of the Coffee Cupping Association of Korea. “The victory proved that the level of Korean baristas has reached world-class in many aspects.”

WBC is not simply a contest of who brews the best cup. While making four types of coffee for five judges, the contestant has to explain their coffee philosophy within 15 minutes. This process is repeated three times, in the preliminaries, the semifinals and finals. Jeon, who was in the contest as the national representative and took 14th place last year, tried for the second time by discussing how carbohydrates influence the flavor of coffee.

Jeon said that carbohydrates are a crucial element that determines the sweetness of coffee, so the balance is important.

“As it was an unfamiliar topic, judges concentrated and listened to me carefully,” she added.

In addition, working with Sidra coffee from La Palma y El Tucan - a farm in Colombia with carbohydrate-rich beans - also hit the mark.

Sidra variety coffee is savory with aromas of dry plums and grapes, and Jeon visited the production region and tasted the coffee in person.

The barista who became most famous from the WBC is Australian Paul Bassett, who won the cup in 2003. Maeil Dairies signed a royalty contract with Bassett and opened a cafe chain called Paul Bassett in Korea.

Will a cafe called Jeon Joo-yeon be opened?

Jeon said that it would be highly unlikely. She believes that people who brew specialty coffee value the relationship with the farmers from the producing regions more than the profits made from the affiliated cafe.

She added that the goal of farmers is to be paid the proper price by producing good coffee, and the goal of baristas is to get high-quality green beans.

“Instead of opening up a cafe under my name, I want to keep focusing more on the cooperation with the farmers from the producing region,” explained Jeon.

For two months, Jeon took part in a language study abroad before she entered the contest in Amsterdam last year.

Jeon said that although it was hard to deliver a presentation in English in front of many people, she was able to do it easily due to thorough preparation.

Starting as a part-time worker in a cafe when she was a sophomore in college, Jeon achieved her dream goal in 10 years. After graduating, she joined the specialty coffee store Momos Coffee in Busan as a founding member and has since been committed to specialty coffee.