Before ‘Avengers’ hits, ‘Birthday’ is still No. 1: Millions have reserved their tickets for ‘Endgame,’ which lands on Wednesday

Before ‘Avengers’ hits, ‘Birthday’ is still No. 1: Millions have reserved their tickets for ‘Endgame,’ which lands on Wednesday 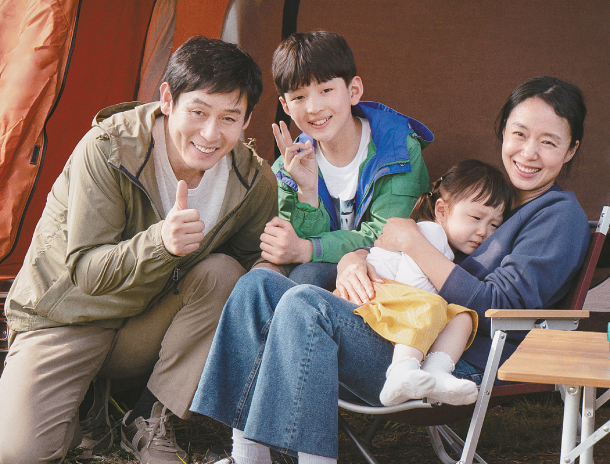 “Birthday” remains on top of the local box office for the last week before “Avengers: Endgame” is released on Wednesday. [NEXT ENTERTAINMENT WORLD]

Local films continued to dominate the Korean box office, although that will surely change this week.

“Avengers: Endgame,” which will be released on Wednesday, is already setting a record by taking 97 percent of total presale tickets, based on data from Korean Film Council released on Monday afternoon.

Based on the charts, over 1.7 million people have made reservations to see “Endgame,” and it seems likely that the number will hit 2 million before its release the day after tomorrow. If this feat is achieved, the movie will have received twice as many ticket reservations as last year’s “Avengers: Infinity War,” which surpassed one million presales in 12 days.

“Birthday” remained steadfast at No. 1 continuing from last week, selling 170,000 tickets for 878 screens. Koreans have commemorated the fifth anniversary of the sinking of Sewol ferry incident last Tuesday, which left a scar on the country that has not yet healed.

The film is a consolation to the remaining survivors and families, and a reminder to the country that people need to continue with their lives but never forget the tragedy that occurred five years ago.

“The Curse of La Llorona” shot up to the second place in its opening week, with 115,000 admissions on 620 screens. The horror film revolves around a Mexican folktale about a mother who drowns her two children in contempt of her cheating husband. 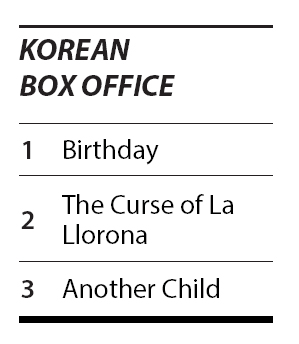 Consumed with guilt, the mother ghost roams around the earth, looking for two children to steal to replace the ones she has lost. The story starts with a believer in the supernatural summoning the ghost to commit revenge.

The supernatural film is the sixth installment in the “The Conjuring” series, although “The Curse of La Llorona” is the directorial debut of Michael Chaves, who will also be directing “The Conjuring 3.” Although the plot was widely considered cliche, audiences seemed to be appreciative of the haunting portrayal of the ghost.

“Another Child” settled into third place, selling 52,600 admissions to 561 screens. Director Kim Yun-suk portrays the affairs of adults through their children’s perspective, highlighting the contrast between the parents’ shallowness with their offspring’s maturity.

“The Big Shot” took number four in its release week, with 46,000 admissions in 447 screens. The story is about a mother’s fierce love for her son, who is facing the death penalty in jail. The mother is portrayed by big-name actor Kim Hae-sook, and the troublemaker son is played by Son Ho-jun, who gained stardom through tvN’s popular drama series “Reply 1994.”

Finally, enthusiastic Marvel fans - or those swept up by the buzz of excitement in the aftermath of visits to Korea by the “Avengers” cast - may have been rewatching Brie Larson’s film, as “Captain Marvel” reappeared in the top 5 rankings. The film sold 44,000 admissions to just 223 screens.

With just one day left before the release of “Avengers: Endgame,” its directors, brothers Anthony and Joseph Russo, have started a hashtag campaign on social media called “Don’t Spoil the Endgame,” asking fans around the world to not to “spoil it for others, the same way you wouldn’t want it spoiled for you,” after watching the film, closing with the final remark, “Remember, Thanos still demands your silence.”