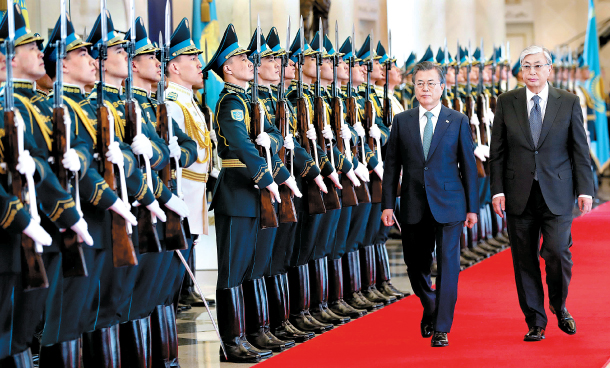 South Korean President Moon Jae-in, left, and President of Kazakhstan Kassym-Jomart Tokayev inspect an honor guard at an official welcome ceremony on Monday. President Moon listened to Kazakhstan’s experiences of nuclear disarmament as he continues to look for a breakthrough in the stalled denuclearization negotiations with North Korea. [YONHAP]

President Moon Jae-in met with Kazakhstani leaders and listened to their experiences of nuclear disarmament and economic growth on Monday as he continues to look for a breakthrough in the stalled denuclearization negotiations with North Korea.

After a summit with Kazakhstan’s President Kassym-Jomart Tokayev on Monday, Moon expressed his appreciation for Tokayev’s support for his efforts to resolve the North Korean nuclear crisis.

After celebrating the 10th anniversary of the strategic partnership between Korea and Kazakhstan, Moon said the country’s development strategy aimed at becoming one of the top 30 global powers by 2050 matches his government’s New Northern Policy of strengthening economic and security ties with northern neighbors.

He also expressed respect for Kazakhstan’s rapid economic development since it became independent in 1991, based on the vision of its current and former leaders, particularly former President Nursultan Nazarbayev. The last remaining Soviet-era head of state, Nazarbayev abruptly resigned last month after ruling for nearly 30 years.

Later in the day, Moon met with Nazarbayev, who is largely credited for the country’s decision to pursue economic growth by renouncing its nuclear weapons. Kazakhstan inherited the fourth-largest nuclear arsenal in the world after Russia, the United States and Ukraine when the Soviet Union collapsed in 1991. It also possessed the Soviet Union’s Semipalatinsk nuclear weapons test site.

After declaring independence in December 1991, Kazakhstan, under Nazarbayev’s rule, transferred all of its nuclear warheads, biochemical weapons and inter-continental ballistic missiles (ICBMs) to Russia by April 1995. The country’s denuclearization was completed in July 2000 when the Semipalatinsk test site was dismantled.

In return, the United States offered economic support under the Cooperative Threat Reduction Program, better known as the Nunn-Lugar Act. Today, Kazakhstan is the largest economic power in Central Asia. After his summit and luncheon with Tokayev, a reception and state dinner was hosted by Nazarbayev.

Nazarbayev transferred his presidential powers to Tokayev last month, but the 78-year-old politician retained his position as the chairman of the United Nations Security Council. The country will have a presidential election on June 9 to select a new president, and Nazarbayev’s first daughter is seen as a leading candidate. When Kazakhstan took over the Council presidency in January 2018, Nazarbayev, the president at the time, urged North Korea to follow the success of his country.

Ahead of his first summit with U.S. President Donald Trump, North Korean leader Kim Jong-un declared in April last year that the country had completed its two-track course of nuclear and economic development, and that the country would shift its policy to concentrate all efforts on building its economy. Skepticism, however, is growing about his will to give up nuclear weapons after the breakdown of the second North-U.S. summit in Hanoi, Vietnam, in February.

Moon had a summit with Trump on April 11 and proposed an inter-Korean summit to Kim to revive nuclear negotiations. At the business forum in Kazakhstan on Monday, Moon once again stressed the successful economic development of the Central Asian country following its denuclearization in a clear attempt to inspire North Korea to follow a similar path. At the forum, he also promoted an ambitious inter-Korean railroad project.

“Last year, the two Koreas agreed to link their severed railroads and roads, and held a groundbreaking ceremony,” he said, adding that the project seeks to link the inter-Korean railroad to Chinese and Russian railways.

Kazakhstan was the last stop on his tour of Central Asia that has also taken him to Turkmenistan and Uzbekistan. He will wrap up his visit today and return to Korea after the eight-day trip.