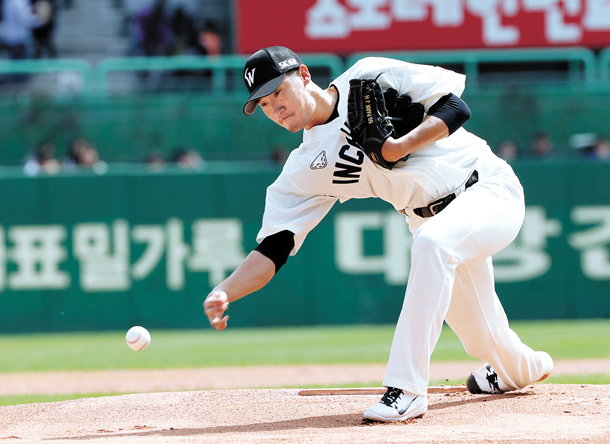 Having made his KBO debut with the Wyverns in 2011, Park will be eligible to try out for the foreign league after the 2020 season. Although he does not have the fastest pitch in the KBO, Park’s release point makes him stand out from the crowd - in 2016 it was just 28 centimeters (11 inches) off the ground.

This season, Park hasn’t gotten a win in the five games he started, picking up two losses, but is off to a great start with an ERA of 3.25 as the Wyverns’ fourth starter.

“When I saw Choi Ji-man [of the Tampa Bay Rays] and Nam Tae-hyeok [of the Wyverns] heading to the United States in 12th grade, I envied them,” Park said. “Although I also got offers, I stayed in Korea because my parents stopped me by saying that it’s better to adjust to the KBO.

“If you’re a baseball player, you dream of playing in the major league at least once in your career. I [also] think that I want to be on that stage.”

Although he still has some time until he is eligible to talk to foreign clubs, Park has managed to catch the attention of some of the scouts. During the Wyverns’ spring training in Florida, a number of foreign scouts turned out to watch Park and the rest of the team play.

“[Regarding my career in a foreign league], I don’t really know anything about it,” Park said. “I heard that some scouts visited our camp but since I don’t know their faces, I thought they were just residents around that area.”

Last season, the Wyverns successfully helped its foreign pitcher Merrill Kelly continue his career in the big league. Kelly played four seasons with the Wyverns and picked up 48 wins and 32 losses with a 3.86 ERA.

Although the 2018 season wasn’t his best season in the KBO, picking up 12 wins and seven losses with a 4.07 ERA, he still helped the Wyverns to win the Korean Series title. Following the victory, Kelly signed with the Arizona Diamondbacks.

With the Diamondbacks this season, Kelly has picked up a win and two losses with a 4.37 ERA in four games, as of Monday.

The Wyverns’ foreign manager, Trey Hillman, also returned to the United States, and is now serving as the Miami Marlins’ infield and first base coach.

Park could be the next Wyverns player to head to the United States, but he isn’t in a rush.

“I still need to make improvements,” Park said. “But it definitely motivates me, and I’m trying to develop my dream. Whether I play as a starter or in the bullpen, the playing position is unimportant. That applies in the big league and right now at SK. If I can just pitch in the major league, I’ll accept any role.”

Although Park will be off to a much later start in the major league compared to Choi, he has never regretted his decision to join the Wyverns. Park was drafted during the 2010 rookie draft and slowly made improvements every year.

He picked up more than 10 wins in a single season in 2017 and has since continuously picked up double-digit wins each season. Last year, he picked up a career-best 14 wins.

Yet it wasn’t always plain sailing. Park was added to the starting rotation in 2015, but despite high expectations, his ERA was stuck around 5.00 for his first two seasons on the mound and in 2016 he walked more players than any other pitcher.

Park lacked control, and this problem continued to plague him even into the start of the 2017 season, when he was sent to the bullpen or even the Futures League multiple times before finally cracking double-digits in August that year and never looking back.

“I was really lucky to be drafted by SK,” Park said. “When I first joined, I received a lot of advice from Chong Tae-hyon [former submarine pitcher on the national team] and a lot of veterans. Still, I’m gaining knowledge from coaches and veterans like Kim Kwang-hyun. I’m still in the process of establishing my pitching form. I want to throw more accurate pitches than now so I don’t struggle with my control.”

Park isn’t the only player with potential on the Wyverns’ roster. The team has the strongest starting pitchers in the KBO this season. Of the Wyverns’ starters, Park is the only one to have not yet picked up a win this season.