Even with his immediate future with the national team in question, Valencia CF midfielder Lee Kang-in said Tuesday he’ll try to keep his focus on representing Korea well at the upcoming FIFA U-20 World Cup. 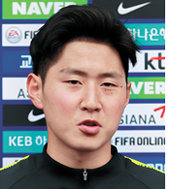 The 18-year-old arrived at the National Football Center (NFC) in Paju, Gyeonggi, to join the rest of head coach Chung Jung-yong’s training camp squad. They’re preparing for the May 23-June 15 U-20 World Cup in Poland.

The final roster is expected to be announced in early May, and Lee is considered a shoo-in. Yet an unexpected development with Valencia has left Lee’s status with Korea in doubt.

The La Liga club has lost winger Denis Cheryshev for the rest of the season with a knee injury, and Spanish media is speculating that Valencia will soon ask Korea to send Lee back to the club to replace the Russian.

Speaking to reporters at the NFC, Lee said his focus for now is on the national team.

“Valencia may need me but now that I am with the national team, I will try to help the country do well at the U-20 World Cup,” Lee said. “I want to build good memories with my teammates here, and I think it’s going to be fun.”

Coach Chung traveled to Spain last month to speak with Valencia’s officials over Lee’s release. Clubs aren’t obliged to make their players available for the U-20 World Cup, which overlaps with the final stretch of the European seasons.

And under an agreement between the two sides, Valencia may ask Korea to return Lee in case of injuries to other players.

Valencia has five La Liga matches left, with the season set to end on May 19, plus the Copa del Rey final against FC Barcelona on May 25 and the two-legged UEFA Europa League semifinals against Arsenal on May 2 and May 9.

Korea will open its Group F action at the U-20 World Cup on May 25 against Portugal.

Korea is also set to face South Africa and Argentina in what is considered one of the strongest groups. Lee said the goal is to “stay in the tournament longer than anyone else.”

“Every team will go in with the goal of winning the title,” Lee said. “I’ve been playing regularly with Valencia and I’ve played the last two matches before coming over here. I think I am in pretty good form and I’ll try to be even better before we fly to Poland.”

Lee received his first call-up to the senior national team last month for two friendly matches at home. He was the seventh-youngest player to make the men’s national team, and he would have become the third-youngest to play for Korea if head coach Paulo Bento had not kept Lee on the bench against both Bolivia and Colombia.