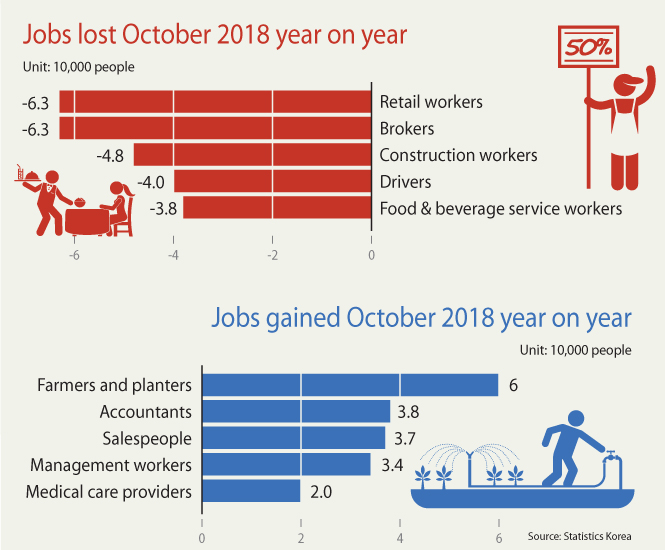 Restaurant jobs in Korea have been vanishing quickly, according to data released Tuesday.

Analysts say the loss in jobs is largely the result of the rapid increases in the minimum wage over the past two years.

According to the Supplementary Results of the Local Area Labor Force Survey in the Second Half of 2018, the number of people employed by restaurants last October was down 104,000 from the same month a year earlier.

That fall was the largest of all categories in the survey.

Other categories also showing major year-on-year declines included: employment agencies, down 85,000; retailers, with 37,000 jobs lost; and land transport services, with 28,000 fewer jobs. Due to troubles at domestic automakers, employment by auto part manufacturers was down 28,000.

Analysts believe the rapid rise in the minimum wage is largely to blame.

“Job categories with many low-wage earners were hit,” by the increase, said Park Young-bum, an economics professor at Hansung University. “The continuing economic downturn, rising minimum wage levels and the enforcement of a 52-hour workweek magnified the impact.”

The Moon administration limited the workweek to 52 hours in March 2018, from the previous 68. The Bank of Korea slashed its forecast for the country’s economic growth in 2019 by 0.1 percentage points to 2.5 percent last week.

Rises were reported in some categories.

In the agriculture and fisheries category, 73.8 percent of workers earned below 2 million won, while 70.2 percent of those working for restaurant and accommodation businesses earned less than 2 billion won.

In finance and insurance, 36.7 percent of workers made above 4 million won. In science and technology, the number was 36.2 percent, while in telecommunications it was 33.5 percent.

According to the survey, 76.9 percent of those making more than 4 million won were employed in management positions.

Many young people work at restaurants, bars and retailers to make money before finding secure jobs, the report said.

It showed that 526,000 people aged between 15 and 29 were working at restaurants and bars in the second half of 2018, followed by 459,000 working at retailers, such as clothing stores and convenience stores.