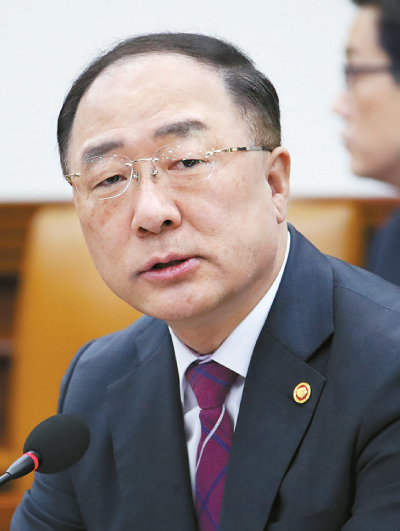 The shoring up comes a week after Kumho Industrial said it will be selling its one-third stake of the troubled carrier.

In an effort to strengthen its cash flow, Asiana this year will be suspending three marginal routes with low seat occupancy rates. The targeted services are Incheon to Khabarovsk and Incheon to Sakhalin, with flights to the Russian cities ending in September. The airline will stop serving Chicago in October.

“Creditors including the KDB have decided to solve the liquidity problem by committing 1.6 trillion won to Asiana Airlines,” Finance Minister Hong Nam-ki said Tuesday during an economic ministers meeting. “The creditors made their decision as they saw the self-restructuring plan as credible.”

Hong noted that the controlling shareholders have agreed to a possible acquisition of the carrier and that the airline’s business is fundamentally sound.

The finance minister said the creditors will be purchasing 500 billion won of perpetual bonds and offering Asiana an 800 billion won credit line.

With the rescue package, the carrier’s immediate liquidity crunch will be solved and the asset is likely to be more attractive to potential buyers. A deal will now be able to proceed smoothly.

The 500 billion won is especially helpful as the principal of a perpetual bond cannot be redeemed. This lowers the company’s debt ratio as the bonds are treated as equity.

Asiana Airlines currently has 3.6 trillion won in debt, of which 1.2 trillion won has to be repaid this year.

Market estimates suggest Asiana Airlines will be sold for around 2 trillion won. The government is hoping the airline will be acquired this year, with potential buyers including the groups of SK, Hanwha and CJ.

“Along with the efforts of Asiana Airlines to improve its business, such as by suspending routes with low profits, we plan to pursue mergers and acquisitions with the goal of signing an agreement this year,” Hong said.

After the announcement was made, Asiana Airlines held a board meeting and accepted the package from the banks.

“We are grateful that we can recover market trust and clear uncertainties related to our liquidity with the timely decision by our creditors,” the airline said in statement. “We will do our best to complete the sales process as soon as possible in cooperation with Kumho Industrial.”

In addition to the three routes that will be suspended this year, the airline will discuss with the creditors the ending of other services next year. According to the Star Alliance, of which Asiana is a member, the airline serves 62 destinations in 21 countries.

Earlier this month, the family controlling Asiana requested 500 billion won from the creditors, saying it was willing to pledge shares of Kumho Buslines as collateral. The creditors rejected the proposal.

Kumho Industrial owns 33.47 percent of the airline and is its largest shareholder.

Kumho Buslines, an intercity bus company founded in 1946, owns 45.3 percent of Kumho Industrial, and Kumho Buslines is 66.2 percent owned Park Sam-koo and his family. The company was known as Kumho Holdings until April 2018.