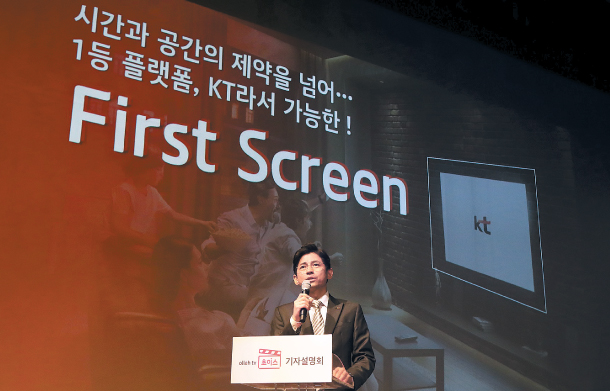 Choi Kwang-chul, a vice president of KT’s media platform business unit, explains how the carrier has partnered with six major entertainment studios in Hollywood to bolster its IPTV service during a press briefing held Tuesday in Seoul. [KT]

KT has partnered with six major Hollywood entertainment studios to bring movies that never made it into Korean theaters to its internet protocol television (IPTV) platform, the carrier said Tuesday.

KT will work with Warner Bros., Sony Pictures, NBCUniversal, Buena Vista International, Paramount Pictures, and 20th Century Fox to offer movies that were well received at the box office in the United States but did not make theatrical releases in Korea.

KT will introduce one new movie once a week. Films will be available on demand through the IPTV platform.

The company has already premiered family adventure film “A Dog’s Way Home” on its platform on Tuesday. Animation films “Smallfoot” and “Captain Underpants” as well as “’Terminal” starring Margot Robbie are due to be released in the near future.

For diversity, the company plans to introduce local independent movies as well as films sourced from Hong Kong and India in the near future. The movies to launch will be selected by a group of experts including film directors and renowned YouTubers, KT said.

KT’s collaboration comes as competition in the local IPTV market heats up. LG U+ has teamed up with Netflix so that its IPTV subscribers can watch Netflix originals through its platform. SK Telecom teamed up with local broadcasting networks KBS, MBC and SBS to counter Netflix.

KT is hoping its exclusive releases will attract more movie-lovers to its IPTV platform, which has over eight million subscribers, according to data from the carrier.

“The IPTV market has been dependent on theatrical releases but [our platform] can become the first screen,” said Choi Kwang-chul, a vice president of KT’s media platform business unit, during a press briefing held Tuesday in central Seoul.

When asked whether KT is considering teaming up with global video streaming service providers like Netflix and Disney, Choi said “nothing has been decided yet, but the company is open to possibilities.”

Kim Se-jong, a team leader under KT’s marketing business group, said that KT’s focus for now is to partner with local content providers to strengthen the domestic media market.