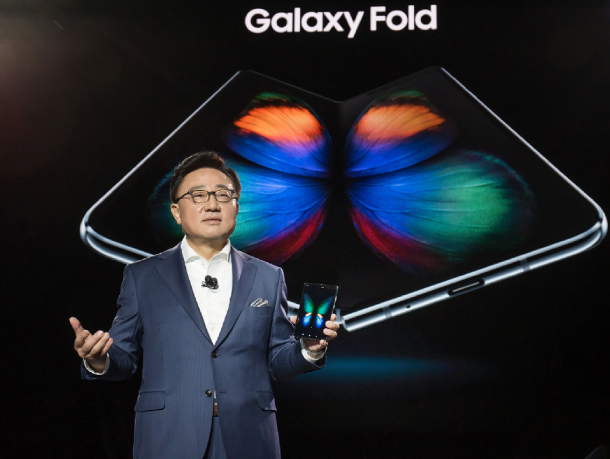 Samsung Electronics President Koh Dong-jin introduces the Galaxy Fold during an unpacking event on Feb. 20. The device was set to go on sale in the United States Friday, but the launch has been postponed. [SAMSUNG ELECTRONICS]

Several U.S. tech reviewers last week reported that their test device’s screen was faulty after a few days of use. They included bulges in the folding screen, flickering screens and black outs.

“To fully evaluate this feedback and run further internal tests, we have decided to delay the release of the Galaxy Fold,” Samsung said in a statement Tuesday. “We plan to announce the release date in the coming weeks.”

The company had the reviewers’ faulty devices shipped to Korea over the weekend for inspection. Among the four Galaxy Fold phones, two had the protective layer on the screen peeled off by the reviewers, who thought it was temporary. Samsung says the film is a permanent component that must stay on the screen.

Initial findings of the inspections released Tuesday dealt with two devices that did not have their protective layers removed. One reported that the issue was the result of “impact on the top and bottom exposed areas of the hinge,” according to the company.

The other device was found to have “substances inside the device that affected the display performance.” A Samsung spokesman added the company is still investigating whether the substances were part of the device and if they weren’t, when they entered.

Tuesday’s statement said the company will take appropriate measures to strengthen protection of the folding screen that is the heart of the device. (There is a second, smaller screen on the outside of the device when it is folded.) It also implied it would provide better instructions, including that the protective film on the screen should not be removed.

The Galaxy Fold was supposed to start U.S. sales Friday. Domestic sales were set to take off next month and for 15 countries in Europe on May 3.

The Galaxy Fold is made exclusively in Korea. The products that were to go on sale in the United States on Friday are still in Korea, according to the company. They would have been shipped to the United States this week. Samsung declined to comment on whether the products were already fully packaged or not.

As for U.S. customers who ordered the Galaxy Fold earlier, Samsung sent an email with an apology. Payments will not be charged until the product is shipped, it said. The company added that updated details on shipping are expected in “two weeks.”

The public’s response to the embarrassing delay was mixed. Some comments on Korean internet portals scolded Samsung for bad quality control before sending devices out to be reviewed. Others said it was better to spot faults before the product hit the market.

“If the reports came up after the release, it would have caused severe damage on not only the product’s sales but Samsung’s brand - the company seems to have judged at this stage that’s more important than pushing forward with the original release schedule,” said a tech industry source. Samsung has a history of recalling faulty smartphones. In 2016, many Note7 phablets caught fire due to battery issues, and sales had to be suspended within a month of release.

But for Samsung, the Fold has to come out sooner rather than later. China’s Huawei is planning to launch a foldable phone, the Mate X, in June. Xiaomi and start-up Royole are other Chinese companies that have promised foldable phones.