Families come together in ‘Parasite’

Families come together in ‘Parasite’

Only time will tell if director Bong Joon-ho’s upcoming film “Parasite” will win the Palme d’Or at the upcoming Cannes Film Festival, but Bong wouldn’t bet on it. At an event held on Monday at The Westin Chosun hotel in central Seoul, the director said that his film “is highly unlikely to win.”

Bong’s latest film has drawn the attention of the film industry ever since it received an invite from the prestigious film festival. It is the only Korean film competing for the award this year. Moreover, it is the director’s first Korean-language movie in 10 years. Both “Snowpiercer” (2013) and “Okja” (2017) mixed both English and Korean dialogue and featured international casts with the likes of Tilda Swinton, Jake Gyllenhaal, Steven Yeun and Chris Evans.

Both films touched on complicated aspects of contemporary society such as social hierarchies and family dynamics, and his new movie is no exception.

In the film, the audience is introduced to an extremely poor family that lives in a half-basement apartment with little sunlight, and a filthy rich family that lives in an unobstructed mansion at the top of a hill. Living on such opposite ends of society, there seems to be no way that the two families’ paths would ever cross. The movie tells the story of how the two families become intertwined. 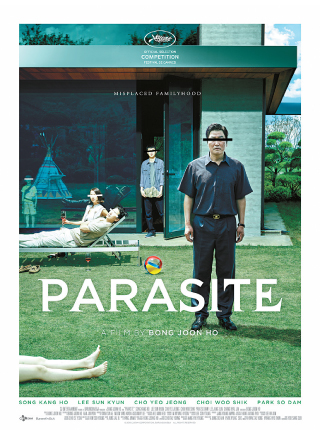 Poster for the world premiere of “Parasite” at the 72nd Cannes Film Festival. [CJ ENTERTAINMENT]

“Although the two families have lived very different lives, when we look at them more closely, their lives may not be all that different, and may even mirror each other,” Bong explained.

The director also shared why his hopes were not very high for winning the award. “The actors were perfect for their roles, which is why I think they have a decent chance to win individual awards,” Bong said. “However, when I saw whom I was up against, I knew my chances were very slim because there were works by directors I’ve admired ever since I started studying cinema during my college years.”

The second reason, Bong said, was because he thought the story of the film would not appeal to an international audience. “For overseas theatergoers, it may be hard for them to comprehend the film 100 percent because there are specific details that may only draw empathy from Korean audiences.”

Bong told the press that the inspiration behind his latest work came in 2013, when an acquaintance suggested a movie idea about two completely opposite families coming together due to an incident.

After he wrote the script, casting became like fitting together pieces of a puzzle as Bong met with actors one on one to ask them to play roles he had already laid out for them.

Song Kang-ho was first asked to play Ki-taek, the father of an extremely poor family. This is Song’s fourth film with Bong - he has also appeared in “Memories of Murder” (2003), “The Host” (2006) and “Snowpiercer.”

Bong personally referred to Song as “a person he could rely on the most.” With Song, Bong said that he can become more daring and challenge himself to try more new things. “Regardless of his role, no matter how small or how big, Song manages to determine the entire flow of the film,” Bong said. “That’s how unrivaled his presence is [in the films].”

The other actors also chipped in to recollect how they received the offer from the filmmaker. Bong asked actor Choi Woo-shik to “keep his body slim” at the “Okja” after-party. On the other hand, the director asked Jang Hye-jin to fatten up to fit into the role. “After I had gained 5 kilograms [11 pounds], I asked [the director] if it would be enough [while we were having a meal together],” Jang said. “Without saying anything, Bong slid the side dishes over to my side and said, ‘Please eat more.’” Jang revealed that she gained a total of 15 kilograms for her role.

The director wanted the characters’ personalities and lives to be as close to real life as possible, which is why there aren’t any “real” villains or ultimate evil in the story. “You could be anyone in the film,” Song added. “Which is why the story is a tragedy as well as a comedy, because we often see the two overlap in real life as well.”

In his closing remarks, Bong admittedly contradicted what he said at the beginning of the press event. “Although [the film] contains details [that may only be spotted by Koreans], its focus on families, about the rich and the poor, are omnipresent all around the world.”

The 72nd Cannes Film Festival will run from May 14 to 25. The film is slated to make its world premiere at the festival, although the exact date has not yet been set. The film’s local release will be at the end of May.