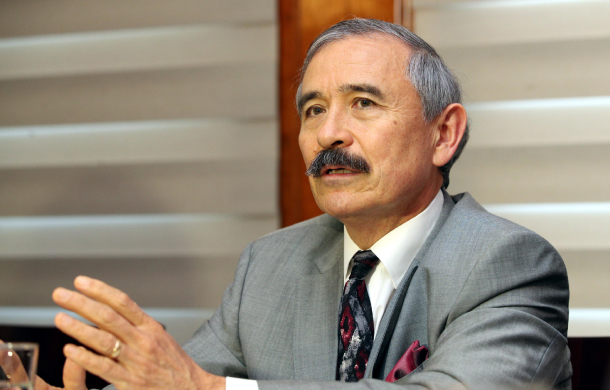 U.S. Ambassador to Seoul Harry Harris talked to Korean reporters at the Habib House in central Seoul on Monday about reaching a comprehensive nuclear deal with North Korea. [YONHAP]

U.S. Ambassador to Seoul Harry Harris said Monday he was unsure what a “middle step” in the process of reaching a denuclearization deal with North Korea would entail, and said that Seoul also has not elaborated on such plans.

Harris told reporters at the Habib House in central Seoul that on reaching a comprehensive nuclear deal with North Korea, “There will be no sanctions relief until denuclearization. So, I don’t know what the middle step is.”

He continued, “The South Korean government hasn’t shared their views with me,” other than that President Moon Jae-in agreed with U.S. President Donald Trump “that the path for sanctions relief for North Korea relies on complete, final fully verified denuclearization.”

The ambassador’s comments were in response to a reporter’s question as to whether Washington would consider a phased approach favored by Seoul toward reaching the final goal of denuclearization of North Korea after the North-U.S. summit on Feb. 28 ended with no deal.

Moon and Trump held a summit in Washington on April 11, their first face-to-face talks following the summit in Hanoi, Vietnam, to discuss ways forward amid an impasse in the denuclearization negotiations with the North.

Trump, at his summit with North Korean leader Kim Jong-un in Hanoi, faced the “choice between a very bad deal and no deal,” said Harris. The president, he added, “made a choice of no deal, which I believe was clearly the right choice.”

Harris said that there “was nothing good enough about the deal that Kim Jong-un offered on the table.”

Trump said in a press conference right after the Hanoi summit that Kim had called for all sanctions to be lifted. North Korean Foreign Minister rebutted that, saying they had asked for a partial lifting of United Nations Security Council sanctions imposed between 2016 and 2017, particularly ones that hamper the livelihoods of ordinary people, in exchange for permanent dismantlement of all the nuclear material production facilities in the Yongbyon nuclear complex under the presence of U.S. experts.

“In return for that, there was a promise of dismantling of Yongbyon at some time in the future,” said Harris. “But at the very moment that the sanctions would have been relieved, North Korea would have received the fiscal relief, the money stream.”

In the meantime, he said, all of the weapons of mass destruction, delivery systems and almost all of the North’s capacity to produce weapons “would have remained intact.”

Yet Harris said that not lifting sanctions “doesn’t mean we can’t make progress in parallel and simultaneously with other three pillars of the Singapore summit,” referring to the joint agreement signed by Kim and Trump on June 12 last year. This includes “transforming” the relationship between the United States and North Korea.

“The tennis ball is in Kim’s court,” Harris added.

Ahead of his first summit between North Korean leader Kim and Russian President Vladimir Putin, Harris said that “Russia is an important player in the region” and that “Kim Jong-un is making his outreach to Russia for whatever reason he deemed necessary.”

Yet Harris told reporters that he couldn’t “predict the outcome” of this summit.

Despite speculation that Kim might try to get Russian support for partial sanctions relief, Harris said, “China and Russia are with us on the sanctions regime” and that they are a “part of the solution and not part of the problem.”

Harris also responded to concerns about South Korea’s position as China and Russia come closer together and the United States draws closer to Japan.

“I believe that South Korea is not isolated when you talk about U.S.-Japan alliance, because the [United States] is also allied with South Korea,” he said.

But he pointed out, “I do believe that when Japan and Korea see eye to eye, the relationships between the three of us are strengthened,” advocating trilateral cooperation.

A South Korean Foreign Ministry official said Tuesday in response to Harris’ remark that he didn’t know what a middle step was, “Korea and the United States, through various channels, including the leaders’ summit, have engaged in detailed discussions with the objective of achieving complete denuclearization.”

The official added that “it won’t be appropriate to try to explain the ambassadors’ remarks,” but added that the two countries are continuing to hold “in-depth discussions” on North Korean denuclearization.