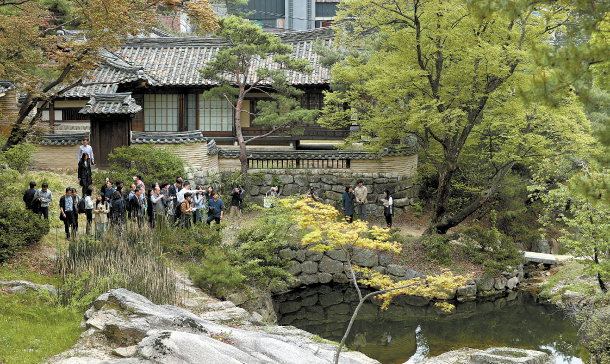 The Seongnagwon garden in Seongbuk-dong, central Seoul, is open to the public through June 11. [YONHAP]

Seongnagwon, a garden located in central Seoul’s Seongbuk-dong, close to a cluster of diplomatic residences in the area, was used as a secondary palace for Prince Uichin (1877-1955), who was the fifth son of King Gojong (1852-1919), for around 35 years, according to the Seoul city government.

Owned privately by a descendant of Sim Sang-eung, the minister of the interior during King Cheoljong’s (1849-1863) reign, the garden has been undergoing preservation work for years. It is open to the public until June 11 as a sneak peek before preservation work is completed.

“This is the best preserved garden from the Joseon Dynasty period,” said Park Jung-sun, director of Korea Furniture Museum in central Seoul, which manages the garden. “We are about 70 percent done with the preservation work. We decided to open it up temporarily to get the public more interested in this project to restore Seongnagwon.”

Seongnagwon was designated as a cultural heritage site by the Cultural Heritage Administration (CHA) in 1992.

The Seoul Metropolitan Government and CHA have been doing preservation work on the garden, including removing embankment of soil to uncover rocks and restore the garden back to its former state in the days of the Joseon Dynasty.

Walking a few steps into Seongnagwon, one is greeted by a tall pine tree and a stream flowing from a pond further up in the garden. At first sight, it does not feel much different from a hiking trail.

“That is the point of a traditional garden of Korea,” Park said. “Unlike Japanese gardens that build extensively upon nature or Chinese gardens that exaggerate the size and impact of the surrounding nature, a traditional Korean garden is about the untouched feeling of nature that preserves the spirit of the area.”

The garden is divided into three sections, which is characteristic of Joseon Dynasty gardens. The entrance has a stream from Mount Bukhan, tall pine trees and zelkova trees.

Further into the garden is a walkway adjacent to a pond from which a visitor can see an inscription by Kim Jeong-hui, a famous calligraphy writer of the Joseon Dynasty. The garden’s innermost area is an observation point where Mount Namsan comes into view in the distance.

The garden is open to the public, though reservations are required, on Monday, Tuesday and Saturday for 10,000 won ($8.70). Entrance is limited to 20 people at a time.

“The point of this garden was that it was to be enjoyed by one or two people at a time, in the calm, to soak in the nature,” Park said.