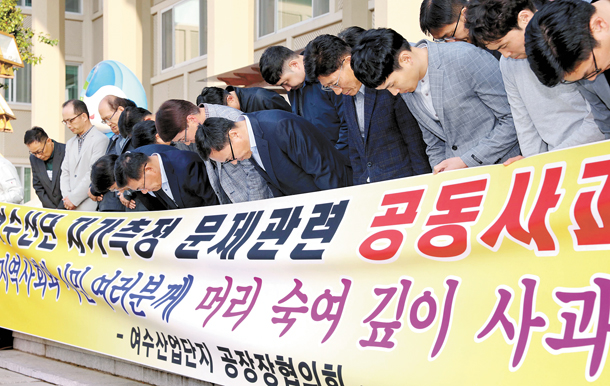 Officials from an industrial complex in Yeosu, South Jeolla, apologize Monday at the Yeosu City Hall after the Ministry of Environment announced that more than 235 companies in the complex may have colluded with inspectors to fabricate environmental reports from their plants since 2015. [YONHAP]

The investigation of pollution test results at the Yeosu Industrial Complex has expanded, with officials now looking into the possibility that almost all tenants at the site were involved in the alleged deception.

Sources are claiming that the rigging of environmental reports is practically a tradition for companies in the industrial complex.

Last week, the Ministry of Environment said it found that since 2015 more than 235 companies in the industrial complex colluded with inspectors to fabricate environmental reports. It said 13,096 test results had been either tampered with or completely fabricated.

The ministry is specifically investigating 23 of the tenants at the complex, such as GS Caltex, Lotte Chemical and Kumho Petrochemical.

“We are carrying out corroborative investigations into other companies and will forward them to the prosecution as soon as the results are compiled,” a ministry spokesperson said.

Under Korean regulations, businesses have to regularly report emissions based on the size of their operations by partnering with inspection companies or conducting inspections themselves.

Since the discovery, all chemical companies that contracted with the four measurement companies fell under the scope of the investigation. The companies were major contractors in the industrial complex and conducted inspections for factories owned by Korea’s largest conglomerates.

LG Chem was the first company in the industrial complex to publicly apologize over the incident. Itsapology came a day after the environment ministry released text messages between LG Chem employees and an inspector last week.

“Please fix the hydrocarbon emission level to below 50,” the text message said.

According to the ministry, LG Chem falsified emissions results of its Yeosu petrochemical plant 149 times from July 2016 to last November.

The chemical company announced in the statement that it will close a polyvinyl chloride factory over the incident. The factory generated around 10 billion won ($8.7 million) in yearly sales.

“Rigging test results for air pollutant emissions has been a tradition for inspection companies,” said a source at the Yeosu Industrial Complex.

According to the ministry, many of the complex tenants were found to have lowered the test results even though they were below the limits set by the government.

Under Korean regulations, businesses that produce more air pollutants than permitted are fined between 5 million won and 10 million won.

Some chemical companies in the Yeosu Industrial Complex, including Hanwha Chemical, denied the ministry’s accusations.

“Although we are responsible for mismanaging our contracted inspection company, there has been no evidence that our employees colluded with the agency,” a Hanwha spokesperson said.

“Our plant was not required to report environmental emissions as it uses hydrogen boilers, but we asked an inspection company to conduct emission tests as we care about the local environment.”

“We have no reason to fabricate the reports,” the spokesperson added.

Hanwha Chemical is accused of altering emissions results 16 times from February 2015 to May 2016 at one of its plants and falsely recording results from three plants 37 times from 2016 to 2017 without conducting inspections.

Some contend the government is partly to blame for the scandal, as it has not regularly checked the work of inspection companies.

Inspection companies receive authorization from the environment ministry and acquire business licenses from local governments, but few, if any, follow-up checks are conducted after they start their businesses.

The four companies involved in the scandal started business after receiving approval from the National Institute of Environmental Research and registering with the South Jeolla government.

But the only evaluation the inspection companies receive was an annual test by the provincial government of their ability to take and measure emission samples.