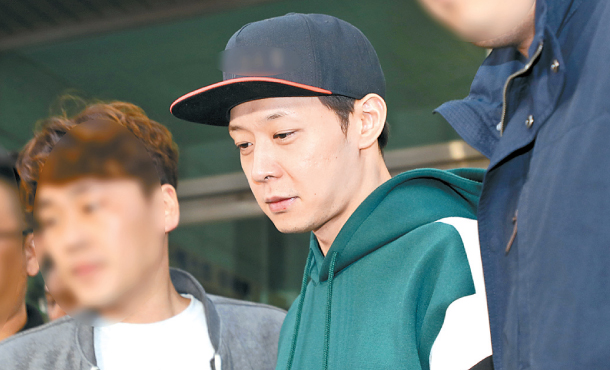 Park Yu-chun’s agency C-JeS Entertainment terminated the singer’s contract on Wednesday, after a drug test he took came back positive on Tuesday evening.

“We had been waiting for the results of the investigations, trusting his innocence, but we found out through the news that the drug testing conducted by the National Forensic Service came back positive,” the agency said in an official statement on Wednesday.

“We had trusted our artist Park Yu-chun, only to feel the despair we do now. The agency came to the decision that a relationship based on trust cannot continue anymore and terminated our exclusive contract [with Park].”

The agency added that Park will retire from the entertainment industry and abide by the rulings that will come from the court in the coming days.

Park, a former member of boy band JYJ and TVXQ, was tested for drugs by police when his former fiancee, Hwang Ha-na, was arrested this month for buying and using methamphetamine in 2015, and told the police that it was Park who coerced her into taking the illegal substance in the first place.

Park denied that had happened, and said at a press conference held earlier this month that he broke up with Hwang last year.

Park made his debut in 2003 with the five-member act TVXQ, but broke off from the group in 2009 with two other members, Kim Jae-joong and Kim Jun-su. The two other members are also signed with C-JeS Entertainment.