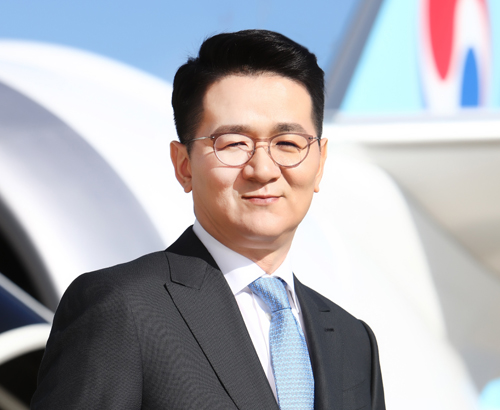 Cho Won-tae, son of late Hanjin Group Chairman Cho Yang-ho who died in Los Angeles earlier this month, has been appointed the new chairman of Hanjin Group on Wednesday. He is also the president of Korean Air.

“We hope to shorten the length of the leadership vacuum through the appointment and also to stabilize the group’s management,” the Hanjin Kal board said in statement.

Cho said he will inherit the “management vision shared by previous chairs of the group and help the company grow further” at the board meeting after his appointment.

Cho started working for Hanjin Group in 2003 at the sales department of the group’s IT service affiliate Hanjin Information Systems & Telecommunication. In the following year, he moved to Korean Air and built his career at divisions of the airline including the strategic planning unit and both the passenger and cargo business units.

As he takes on his father’s role, the new chair will also be the host of the International Air Transport Association’s Annual General Meeting and World Air Transport Summit to be held in Seoul in June, Hanjin said. It is the first time that the gathering of the top leaders from the global aviation industry has been held in Seoul.

Cho’s appointment comes roughly a week after his father Cho Yang-ho’s five-day funeral ended on April 16. The late chairman died at 70 from a chronic lung disease.

While Cho Won-tae tried to avoid the media during the funeral period, he did tell reporters that his father’s last words were an instruction to “lead [the company] in harmony with family members,” as he arrived at Incheon International Airport for the funeral service on April 12.