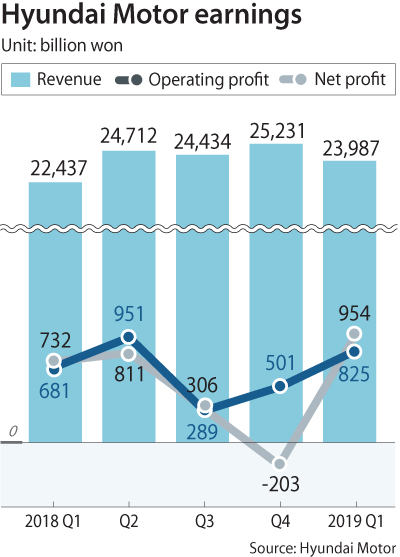 Hyundai Motor reported improved earnings in the first quarter after a shock net loss in the final quarter of last year thanks to strong sales of its newly released vehicles.

The results were better than the average analyst prediction of 770.2 billion won in operating profit and 23.2 trillion won in revenue compiled by data tracker FnGuide.

The company struggled last year when it reported 203 billion won in net losses in the final quarter, a first in eight years.

Hyundai Motor cited strong sales from new vehicles, including the large-sized Palisade sport-utility vehicle (SUV), and improvements in its financial business for the improved earnings.

Hyundai said the share of SUV sales in the quarter rose 3.7 percentage points from the previous year to 38 percent of the total with the launch of the Palisade late last year and renewed interest in its Santa Fe SUV.

The automaker sold 18,000 Palisades in the first quarter.

It also said that it expects to sell 94,000 Sonata sedans this year, a 40 percent increase from the previous year. The new version of the sedan picked up over 12,000 units in preorders before its launch earlier this month.

Operating profit from vehicle sales rose by 107 billion won in the first quarter from last year while those from financial businesses increased by 94 billion won.

Hyundai Motor remained upbeat in the domestic market, adding that annual sales in Korea will likely exceed its target of 712,000 units.

The automaker also explained that it is planning to bolster its presence in the United States through its appointment of former Nissan executive Jose Munoz as its global chief operating officer and CEO of Hyundai Motor North America. Munoz will join Hyundai from May.

Hyundai Motor said it will strengthen its vehicle lineup with the scheduled global releases of the Palisade and Sonata in the second quarter.