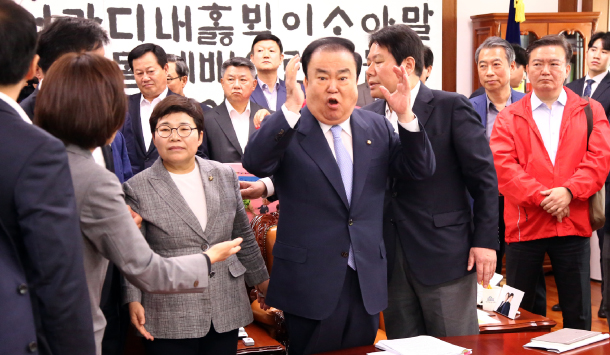 Lawmakers from the main opposition Liberty Korea Party on Wednesday storm the office of National Assembly speaker Moon Hee-sang, center, and demand that Rep. Oh Shin-hwan of the Bareunmirae Party be kept on a special parliamentary committee on judicial reform tasked with reviewing a bill on a new investigative agency for senior government officials. [NEWS1]

Chaos reigned at the National Assembly Wednesday after the opposition Bareunmirae Party’s (BP) leadership removed one of its lawmakers from a committee after he announced he would not approve the fast-tracking of a bill to establish an independent investigative agency.

The BP’s floor leader Rep. Kim Kwan-young started a political earthquake in the legislature by announcing he would remove Rep. Oh Shin-hwan from a special parliamentary committee on judicial reform tasked with reviewing the bill on the new agency, saying he regarded Oh’s pledge to vote it down a sign that he did not want the task. Kim replaced Oh in the committee with BP Rep. Chae I-bae, who is believed to vote in favor of the agreement.

Four political parties — the ruling Democratic Party (DP) and the BP, Justice Party and Party for Democracy and Peace — agreed Monday to fast-track that bill and another on reforms to the electoral system, packaged together.

Oh immediately protested the decision and filed a complaint with Assembly speaker Moon Hee-sang saying he would not quit the committee. Dozens of lawmakers from the main opposition Liberty Korea Party (LKP), which had been staging an overnight sit-in protest against the four-party agreement, stormed the speaker’s office soon after to demand Oh be kept on. They shouted at the speaker and physically blocked him from leaving his office.

Moon ended up in a nearby hospital due to what his spokesman said was “a shock from low blood sugar.” The LKP later demanded that he resign as speaker, claiming that Moon had sexually harassed one of its female lawmakers by grasping her face with two hands during the tussle.

Wednesday’s legislative chaos revolved around the four parties’ ratification of the twin bills in meetings with their lawmakers on Tuesday.

But within the center-right BP, which has been facing severe internal turmoil for months, the agreement was subject to an intense debate between its factions. Although members of the faction from the former People’s Party, like floor leader Kim, ultimately won an internal vote by a razor-thin margin, dissenters remain.

Oh wrote on Facebook early Wednesday morning that he would use his vote on a special parliamentary committee on judicial reform to strike down the agreement on the new agency, which is supposed to investigate corruption among high-ranking officials, since he could not “betray [his] principles.”

That jeopardized the four-party agreement that floor leader Kim had reached after fourth months of negotiations.

The parliamentary committee on judicial reform was supposed to approve the bill on Thursday. Oh and fellow BP lawmaker Rep. Kwon Eun-hee held the deciding votes. A separate special committee on political reform will review the bill on electoral reform, which has been packaged with the bill on the investigative unit as part of the compromise among the four parties.

Endorsements by these committees would ensure the bills reach the floor for a general vote without being obstructed by opposing lawmakers.

While his position as floor leader gives Kim the authority to make personnel decisions on the legislature’s committees, his decision to force Oh out could lead to the BP’s splintering with defections from dissenting lawmakers.

Discord within the BP also leaves it vulnerable to manipulation by the main opposition party, the LKP, which objects to both bills. Just before Kim’s decision was pronounced, LKP floor leader Na Kyung-won appeared to foment the BP’s crisis by claiming Kim had said in a floor leaders’ meeting that he would defect to the ruling DP, implying he had pushed through the multiparty agreement with this plan in mind.

Analysts say that while Kim’s decision may have secured the bills’ passage in the legislature, he may have crossed the Rubicon in terms of saving his party and preventing a major political alignment from taking place before next year’s parliamentary elections. Already dissenting lawmakers in the BP are calling for Kim to step down as floor leader, claiming he had revoked a promise he made earlier not to remove Oh from the committee. A forseeable split of the BP could see Korea’s political landscape return to a two-party system between the DP and LKP.

A departure from moderate politics is particularly apparent in the LKP, whose recent rhetoric has developed McCarthy-like undertones.

In the middle of a sit-in protest at the National Assembly, LKP floor leader Na Kyung-won claimed that the electoral reform bill in question would usher in “an age of dictatorship” under a coalition of leftist parties with an absolute majority in the legislature.

This ruling bloc, Na argued, would establish a “de facto socialist state…that subjects South Korea to the North’s nuclear arms” and “shift the market economy to a planned economy.”

Na called the proposed new investigative agency a “Gestapo” that would be used by the Blue House to crack down on political opponents.

These arguments have been cited by analysts as part of the LKP’s strategy to rally the conservative vote in Korea in advance of next year’s general election.